Palestinian cleric: Hating Jews is an Islamic religious obligation; Abbas is wrong to deny it 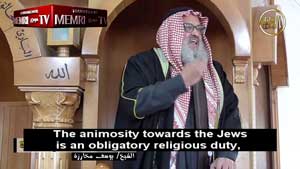 (MEMRI via JNS) – A Palestinian cleric criticized Palestinian Authority leader Mahmoud Abbas recently for saying that any Muslim who considers himself an enemy of the Jews is a heretic.

In a Friday sermon in Jerusalem that aired on Lebanon’s Hizb ut-Tahrir-affiliated Al-Waqiyah television, Palestinian cleric Yousuf Makharzah said that animosity towards Jews is an Islamic religious duty, and that any Muslim that does not show enmity to the Jews is a heretic.

Makharzah cited a Koranic verse that says that the Jews hold the most intense enmity against the Muslims, and said of Abbas: “Where did you learn Islam? Did you learn it from [your adviser, Mahmoud] Habbash? Or [from Israeli politicians] Yossi Sarid or Yossi Beilin? … Do you think that Islam [is] a decapitated corpse? O Abbas, Islam will not die in the hearts of the believers!”

U.S. White supremacists distributed more propaganda in 2019 but held fewer events
The Virus in NYC and in the Jewish community