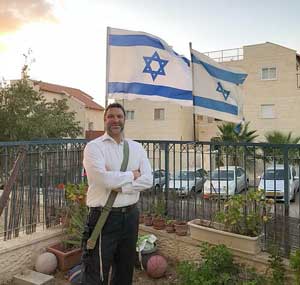 Ari Fuld at his home in Efrat, Israel. Photo courtesy of Yishai Fleisher.

Israel Hayom (via JNS) – An Israeli military court recently convicted the Khalil Jabarin, 18, for the 2018 murder of Israeli-American Ari Fuld.

The court at the Ofer military base convicted Jabarin on a charge of voluntary manslaughter, the court’s equivalent of murder.

Fuld was stabbed in the back by the then-16-year-old Jabarin at the shopping center at the Gush Etzion junction on Sept. 16, 2018. Fuld drew his sidearm and managed to shoot his attacker, preventing him from assaulting other civilians in the area, before collapsing and being rushed to a hospital, where doctors declared him dead.

For his heroism, Fuld was posthumously awarded a civilian medal of valor.

His family put out a statement expressing their satisfaction with the verdict and called for Israel to implement a death sentence for terrorists.

“We’re happy about the ruling to convict the loathsome terrorist on the severest charge possible and we hope he will receive the maximum sentence. In a functional world, this terrorist criminal would get the death sentence to deter anyone who is thinking about going out and attacking Jews. There is one solution for future deterrence—the death sentence for terrorists,” the statement said.

The family asked that the nation’s leaders wage a fierce battle against terrorism.

“We are appealing to the prime minister and the defense minister; we will carry the pain with us for the rest of our lives. Your job is to be strong. To defend the citizens of Israel on all fronts, to put down roots in our homeland, to deepen our hold on this good land, to strengthen [our] sovereignty in all parts of the homeland without bowing down to terrorism or being weakened by despicable murderers,” said the statement.

Hila Schlakman finishes daily Talmud learning cycle, may be youngest woman to do so
Why the Jersey City official who called local Jews ‘brutes’ after shooting has not resigned