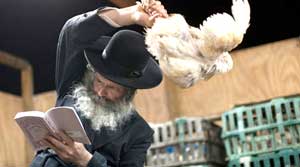 By MARCY OSTER
NEW YORK CITY (JTA) – An organization that objects to a  some group’s pre-Yom Kippur ritual that involves swinging live chickens is renewing its legal effort to stop the rite in New York City, citing the coronavirus pandemic.

Kapparot involves swinging a live chicken over one’s head three times and reciting a prayer to transfer sins to the bird. The chicken is then slaughtered and donated to the poor.

In recent years, money has replaced the chicken in the rite for many Jewish groups, but the practice continues in some communities, including some Orthodox neighborhoods of Brooklyn. That has angered advocates who say the practice is abusive to animals.

In 2017, a state appeals court struck down a lawsuit calling for New York police and health officials to block the practice. But the Alliance to End Chickens as Kaporos filed a recent motionto renew the lawsuit, first filed in 2015, citing fears that the ritual could spread dangerous pathogens in the air, just as scientists believe that animals in the wet markets of Wuhan, China began spreading the COVID-19 virus.

“In light of the Covid-19 virus, and the consensus that it arose from a zoonotic cause, many people have been questioning how the city can possibly allow Kaporos to take place this year,” attorney Nora Constance Marino, who represents the alliance, said in a statement in July. She said the current pandemic represented new evidence that warranted reopening the suit.

There are more than 80 live animal markets in New York City, where the animals are slaughtered on the spot, NY1 reported, which also is a concern of animal activists.