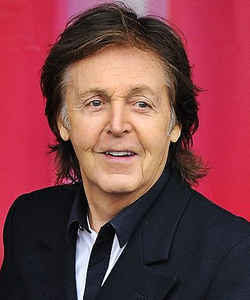 Each year the Wolf Foundation awards $100,000 prizes in five fields. More than 30 winners have later  receiveed the Nobel Prize.

The announcement called McCartney “one of the greatest songwriters of all time. His versatility underlies an extraordinary wingspan, from the most physical rock to melodies of haunting and heartbreaking intimacy. His lyrics have an equally broad range, from the naive and the charming to the poignant and even desperate. He has touched the hearts of the entire world, both as a Beatle and in his subsequent bands, including Wings.

McCartney shares the prize with conductor Adam Fischer, who the prize committee called an “eloquent defender of human rights,” particularly “his protest against the political developments in his native Hungary.”

Seven other prizes also were announced in the fields of mathematics, chemistry, physics and agriculture.

According to the Wolf Prize, the prizes will be presented to the winners by Rivlin at a ceremony to be held at the Knesset in Jerusalem, at the end of May. The Associated Press reported that the prize foundation had notified McCartney representatives of the prize, but that it was not immediately known if the former Beatle would attend the ceremony.