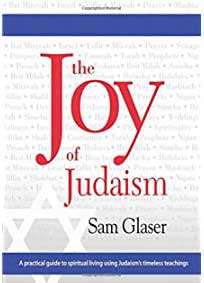 By SAM GLASER
An excerpt from The Joy of Judaism

On the first night of Nissan, we start counting until the moon is full on the fifteenth. This is Seder night, our annual birthday party as a nation. Some 3000 years ago, we were an enslaved people yearning for liberation from a decadent tyrant. Thanks to the genius of the Haggadah, every year we gather to start our calendar anew by retelling the saga of the birth of the unbreakable soul of our nation.

Pesach reminds us that we have a powerful, unique neshama (soul) as individuals and are also a part of the greater soul of the Jewish people. Pesach is the celebration of the power of the tribe and is an ideal time to investigate the details of our metaphysical existence.

Chazal (our sages) teach that ideally our neshama is the rider while the body is the horse—honored with shlepping our precious, divine soul on its mission. Kabbalah offers a window into our neshamot. Our tradition teaches a Five Levels of the Soul paradigm clarifying the features of the ephemeral self. In the interest of enhancing the Pesach experience, let’s explore these five levels using the teachings of three of my favorite rabbis, David Aaron, Benjamin Blech and Tom Meyer.

Nefesh
The first level is known as nefesh. This is an aspect of consciousness we share with the animal kingdom. It is the basic life force, our instinct, our autonomic survival functions. For humans, it takes on a more elevated role. Unlike all other creatures, humans don’t rely on mere instinct; we also have a deep-seated feeling of nobility and awareness of right and wrong. Our nefesh is expressed when we hear the voice of the conscience, the cross-cultural awareness of good and evil. Hollywood blockbusters with heroes and villains can be marketed internationally because all humans share certain internal ethics. That’s our nefesh speaking. Another important aspect of nefesh is our hunger for meaning. Darwinian evolutionists and physicists cannot adequately explain why the nefesh is present. But it is. And we know its voice like we know we have five fingers on our hand.

Ruach
The next level is known in Kabbalah as ruach. It is a uniquely human attribute and is based on our quest for truth. Ruach is typically translated as wind or spirit—like the passage of wind from our lungs when we speak. What do we mean by saying words “ring of truth?” It means that our soul can intuit truth from falsehood. Great music endures forever because our ruach soul hears it as truth, a taste of eternity.

One of my first post-college bands was an R&B outfit called Showglow. We played a funky blend of Top 40 cover tunes at private parties and street fairs. Showglow rehearsed in a shipping container parked behind the Hollywood Guitar Center store. I got to know a quartet of hard rockers in the container next to ours. I was impressed at their commitment—not only did they rehearse in the cramped quarters, they lived there, too. I was convinced that for all their dedication, they were going nowhere. Nevertheless, they lived rock and roll in all its glory and their songs reflected their drug use, one-night stands and broken dreams. The band was called Guns N’ Roses. Within a few years, they became the biggest act in the world. I’m convinced they shot to the top because they sang from a place of truth. In an era dominated by corporate rock and high-gloss production, GNR was raw and real and their angst and rebelliousness resonated with those of a certain age all over the world. In the end, ruach wins the day.

Neshama
The third level of the soul is referred to as neshama. Neshama is the generic Hebrew term for soul. But in this five-level model, it refers to the power of our thoughts. We are affected by more than mere actions and words. We have ideals. We have a sense of mission, a belief we have a special purpose and it’s our neshama speaking when we pursue happiness. It’s clear we have a neshama, a divine force informing our every motivation.

Chaya
The penultimate level of the soul is the reason that Passover is one of the most widely celebrated holidays. We love the traditions, songs and stories associated with our annual homecoming. We love spending time with fellow members of the tribe, engrossed in the powerful mitzvah of the transmission of our heritage. That, my friends, is our chaya. Chaya means life-force and that of every nation is distinctive. For the extended Jewish family, it’s our chaya that makes Jewish summer camp so redeeming. Chaya gets us to services on Friday night even though the prayers will be the same as the previous week. What could be better than shmoozing with our fellow Jews over herring, chrein and rugelach?

One of the best textual examples of the realm of chaya is the manner in which the Torah describes death. At the end of their days, our biblical heroes are “gathered to their people.” We, too, will be escorted to this heavenly Jewish jam session at the end of our lives. Our chaya is the “pintele yid” (Jewish pilot light) that gets sparked up when we hear a great sermon, Chasidic story or Jewish song. That’s our chaya igniting when we fall in love with Israel the first time we stroke the stones of the Kotel or stroll Dizengoff Street in Tel Aviv. This fourth level of the soul supersedes common sense in regards to the survival of the fittest; thanks to our chaya we are willing to lay down our lives for the love of country.

Yechida
The top of this pyramid of the Five Levels of the Soul is known as yechida. It’s the identification with the ultimate universal soul, connecting with the realm of Atzilut, the omnipresent entity we call Hashem. Yechida is related to the idea of being separate, alone with another. The “yichud room” at a traditional Jewish wedding is where the bride and groom complete their marriage with seclusion in an intimate space just after the ceremony. We’ve all felt yechida with the Almighty—those times when we are deeply connected and totally blown away. Most parents describe unbridled yechida at the birth of a child. Some get it while carving fresh tracks on a deep powder ski day or getting lost in a beautiful piece of music.

I have many friends who know they were saved from a potential accident by miraculous intervention. Another word for that “knowing” is yechida. Yechida is when we’ve finished the third cup of wine at a great seder and we’re singing Hallel with joyful abandon. We say Sh’ma twice a day to remind ourselves of the possibility, just for that moment, to love God with all our heart, soul and might.

We can’t stay in the realm of yechida. We get momentary glimpses and then our ego pulls us away. Even though yechida is fleeting, it is still of supreme value. We can use moments of “yechida memory” to guide us through times of darkness. God gives us tastes of yechida throughout our lives so we become accustomed to the phenomenon of true oneness we attain when our neshama leaves this world.

The experience of immersing in the Pesach week of freedom impacts us on all five levels of the soul. We emerge from the holiday able to maximize the expression of our neshamot, connect deeply with our chaya and hopefully taste yechida with the Great Soul. Many are oblivious to their soul’s resonance. Pesach allows even the empirically minded the chance to connect.

This Pesach, embrace the rollercoaster ride of unabashed neshama inebriation! Use the four cups of wine to get just a bit out of time and space in order to enter the story, a story that is still being written. Remember the Five Levels of the Soul and how the realm of the spirit can be even more tangible than that of the material. Bask in the love of the Great Soul who has sustained us to reach yet another cycle of Jewish holidays.

Sam Glaser is a performer, composer, producer and author in Los Angeles. He has released 25 CDs of his music and his book The Joy of Judaism is an Amazon bestseller.  He produces albums and scores for media in his Glaser Musicworks recording studio. He nay be visited  online at www.samglaser.com.