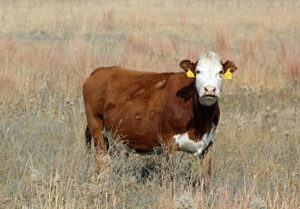 By NATHAN LEWIN
(JNS) – The European Court of Justice is being slammed by Jewish organizations around the world for its decision approving a Flemish law that effectively prohibits kosher and Muslim slaughter of animals. The law upheld by the court concerns the “protection and welfare of animals.” It permits the slaughter of animals “according to special methods required for religious rites” only if the animal is stunned before slaughter. Since stunning before slaughter renders an animal non-kosher (treif), the court’s decision effectively permits the prohibition of kosher slaughter (shechita).

Frontal Assault On Rights
Critics of the decision call it a “frontal assault” on the basic rights of Jews and Muslims. They claim correctly that freedom of religion should prevail even if it conflicts with protecting animals. But the advocates of kosher slaughter did a poor job in the European court. Rather than defending shechita as entirely humane—no less so because it is performed on a conscious animal—they conceded in court that stunning an animal meaningfully reduces the cruelty of slaughter.

One must read the full decision of the court to know the issues presented to it. It is apparent from the court’s decision that no one called the court’s attention to a similar controversy in the United States Congress in 1957, when animal-rights groups pressed for the enactment of a federal Humane Slaughter law. The legislation promoted by those concerned with animal welfare directed that before being slaughtered all “cattle, calves, horses, mules, sheep, swine and other livestock” must be “rendered insensible to pain by a single blow or gunshot or an electrical, chemical or other means that is rapid and effective.”

Humane Slaughter?
Intending to preserve kosher slaughter in the United States, the initial draft provided that the law should not apply “to any individual who is duly authorized by an ordained rabbi of the Jewish religious faith to serve as a shector.” Recognizing that Muslim slaughter also prohibited stunning, a later draft exempted “any individual slaughtering in accordance with the requirements of any established religious faith.”

But Jewish advocates with foresight (including my late father, Dr. Isaac Lewin) saw that such provisions would not give permanent effective protection for kosher slaughter. They demanded that the legislation explicitly declare that kosher slaughter of conscious animals is as humane as slaughter after stunning because the effect of the shechita cut is that the animal immediately loses consciousness. They provided the congressional committees the scientific conclusions of 74 named experts of veterinary science, including the detailed opinion of a Nobel Prize winner in physiology or medicine who had personally witnessed kosher slaughter and declared that it fulfills “every requirement demanded by the dictates of mercy.” They said that there were “more than 800 notable authorities in the field of physiology” who had approved of shechita as humane.

Intensive lobbying included testimony before congressional committees by my father. The deputy administrator of the Agricultural Department’s Research Service also testified before a House committee. While affirming the humaneness of shechita, he raised serious doubts about stunning prior to slaughter. He said that electrical stunning could result in “undesirable hemorrhaging” and in “such tremendous spasms as to actually break the animal’s back.”

The result was the current federal law. It recognizes explicitly that “a method of slaughter whereby the animal suffers loss of consciousness by anemia of the brain caused by the simultaneous and instantaneous severance of the carotid arteries with a sharp instrument” is an equally humane alternative. The law describes this as “in accordance with the ritual requirements of the Jewish faith or any other religious faith that prescribes” this method of slaughter.

Establishment Of Religion?
In 1974, the fears of defenders of shechita were realized. A federal lawsuit was initiated against the Secretary of Agriculture on behalf of “friends and guardians for all livestock animals now and hereafter awaiting slaughter in the United States,” the Society for Animal Rights, and the Committee for a Wall of Separation Between Church and State in America. It claimed that the provision permitting slaughter without stunning violated the First Amendment’s prohibition against establishment of religion.

Under then applicable federal law, the case had to be heard by three judges. One of those selected at random was Henry J. Friendly, an icon of the federal judiciary. Another was Judge Edmund Palmieri, a federal trial-level judge who is remembered today mainly because he had the initiative and courage to hire a female named Ruth Bader Ginsburg as his law clerk.

Noneducated Response
Neither this history nor the scientifically supported proposition that shechita’s “simultaneous and instantaneous severance of the carotid arteries with a sharp instrument” is as effective as stunning was presented to the European court. It is clear from the reasoning articulated in the opinion that no one gave the European court the evidence that was heard by the American congressional committees. The European court assumed that animal welfare, which it recognized as a permissible legislative goal, required stunning before slaughter. It held that stunning only affected “one aspect of the specific ritual act of slaughter and that act of slaughter is not, by contrast, prohibited as such.” This limited restriction, it said, “is appropriate for achieving the objective of promoting animal welfare.”

Jewish law was sensitive to animal welfare long before Western civilization—typified by the European Court of Justice—ever recognized it as a concern worthy of human attention. Torah commands against muzzling an ox while it threshes (Devarim 25:4) and against plowing with an ox and a donkey together (Devarim 22:10) are illustrative. Rabbinic directives prohibiting the torture of living creatures (tza’ar ba’alei chayim) are well-recognized. Jewish religious slaughter should have been defended in the European Court of Justice because, by its very nature, it has always imposed a high standard of animal welfare, and not because respect for religious ritual requires that animal welfare be compromised.

Nathan Lewin is a criminal-defense attorney with a Supreme Court practice who has taught at Georgetown, Harvard, University of Chicago, George Washington and Columbia law schools.