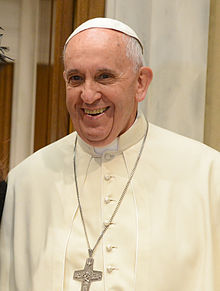 NEW YORK CITY (JTA) – Pope Francis called indifference about anti-Semitism a contagious “virus” and, quoting Christian texts, urged a European audience to do more in the fight against hate and anti-Semitism.

“I am grateful for the noble aim that brings you here: to reflect together, from varying points of view, on the responsibility of states, institutions and individuals in the struggle against anti-Semitism and crimes associated with anti-Semitic hatred,” the pope told a conference held recently in Rome organized in cooperation with the Organization for Security and Co-operation in Europe, or OSCE, with the support of the Office for Democratic Institutions and Human Rights and in collaboration with the Union of Italian Jewish Communities and the Foundation for Contemporary Jewish Documentation Center.

At the Consistory Hall of the Apostolic Palace, Francis received an audience of conference participants to discuss the responsibility of states, institutions and individuals in the fight against anti-Semitism and anti-Semitic hate crimes.

“The Church desires to extend her hand,” the pope said. “She wishes to remember and to walk together on this journey.”

Francis quoted the Nostra Aetate 4 text saying that “the Church, mindful of the patrimony she shares with the Jews and moved not by political reasons but by the Gospel’s spiritual love, decries hatred, persecutions, displays of anti-Semitism, directed against Jews at any time and by anyone.”

According to the Vatican press office, Francis also said, “We are responsible when we are able to respond. It is not merely a question of analyzing the causes of violence and refuting their [anti-Semitic crimes’] perverse logic, but of being actively prepared to respond to them.”

Just one month ago, Francis in a written statement condemned the Holocaust and the medical experiments conducted by Nazi doctors on Jewish concentration camp inmates.

Francis, the former cardinal of Buenos Aires, wrote the forward of a book by Rabbi Sergio Bergman, the current Argentine minister of sustainability, and referred to him as “one of my teachers.”