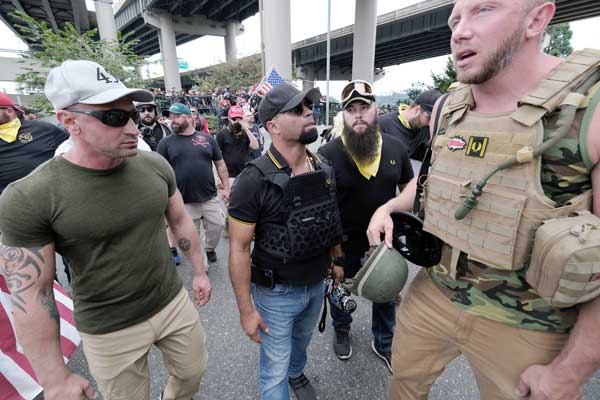 Far-rightists from the Proud Boys wait to get into vehicles after marching across the Hawthorne Bridge in Portland, Ore., Aug. 17, 2019. Photo courtesy ofAlex Milan Tracy/Anadolu Agency via Getty Images.

By JOSEFIN DOLSTEN
NEW YORK CITY (JTA) – When rabbis in Portland joined a coalition of faith and civil leaders to denounce purveyors of violence and hateful rhetoric, it was mostly far-right protesters they had in mind.

Worrisome Remarks
But when President Donald Trump weighed in on the day of the protests and occasionally violent counterprotests, he had only one side in mind: the left-wing opponents known collectively as Antifa, or anti-fascists, who gathered to confront the far right.

“Major consideration is being given to naming ANTIFA an ‘ORGANIZATION OF TERROR,’” the president tweeted Saturday morning. “Portland is being watched very closely. Hopefully the Mayor will be able to properly do his job!” He didn’t mention the far-right groups.

For some Jews the president’s comments showed at best a disconnect with their real concerns and at worst a vote of confidence for the far right.

Trump’s tweet apparently referred to a Senate bill that would designate Antifa as a domestic terrorist group. Rally organizer Joe Biggs, formerly of the far-right conspiracist site Infowars, said the goal of what he called the “End Domestic Terrorism” rally was to confront Antifa and support the measure introduced by Sens. Bill Cassidy, R-La., and Ted Cruz, R-Texas.

“It validates their efforts,” she said, referring to the far right. “This is a group that has embraced all forms of isms —misogyny, Islamophobia, xenophobia. To not call them out is to ignore and condone a problematic group.”

“Rooted In Hate”
Mendelson said that while violence on both sides is problematic, the far-right groups’ ideology differs in that it is rooted in hate.

“When you have groups whose rhetoric and whose aim and whose purpose is to promote an agenda that demonizes [women, Muslims and immigrants] in our country, that’s a concern,” she said, noting that ADL found that extremist-related murders in 2018 were overwhelmingly linked to right-wing extremists. No murders had been tied to Antifa, she said.

Portland police were mostly able to keep the two sides — far-right out-of-towners and a larger number of people affiliated with a local Antifa group — apart during Saturday’s protests. They reported 13 arrests and six minor injuries, and police seized bear spray, shields, poles and other weapons, The Associated Press reported.

Seeking Confrontations
Right-wing groups have marched repeatedly in Portland in recent years, in part because they expect confrontations with the city’s active Antifa community.

Some leaders in the Portland Jewish community of 35,000 also see the violence as troubling on both sides, but see a fundamental difference in the ideology behind it.

“People are very upset about the acts of violence that are being done by some people under the guise of Antifa, and that violence really doesn’t have a place in our community, but I don’t think in the Jewish community people are making any equivalency between the two” sides, said Michael Cahana, the senior rabbi at Congregation Beth Israel, a Reform with some 860 families.

Gunmen who espoused white supremacist beliefs are being held in two deadly synagogue shootings in the past 10 months. Eleven worshippers were killed in a shooting at a synagogue complex in Pittsburgh and a woman was gunned down at a synagogue in Poway, Calif. A self-identified white nationalist was arrested recently for plotting an attack on an Ohio Jewish community center.

Seeking Safety
Cahana was part of the coalition of faith and civil leaders organized by Mayor Ted Wheeler ahead of the event. He said there was “a lot of anxiety” among community members prior to the demonstration about security issues in a city that has seen previous clashes between far-right groups and Antifa. The community made sure members were “hyper vigilant” and that regular security protocols were followed..

A Jewish Response
As the far-right groups were preparing to gather in a downtown park, Rabbi Debra Kolodny had a much different response from Trump and the Antifa groups: She put on her tallit and, in front of some 60-75 people, chanted the Hebrew liturgy that make up the Saturday morning Shabbat service.

By the end of the service, which also featured a Buddhist prayer and a speech by an NAACP official, some 300-400 people had gathered.

“I have to stand up as a Jew,” said Kolodny, who leads Unshul, a Jewish prayer and social action community that hosts Shabbat services several times a month. “I have to stand up against it. There are those who believe that ignoring the white nationalists will make them go away, and I don’t believe there’s any evidence of that.”

This is how bad it is: Parents are buying bulletproof backpacks for their kids.
New RJC political director eyes shifting trends, saying Republicans could gain Jewish votes