Pro-Israel groups react to Erdan’s appointment as next Israeli envoy to U.S. and UN 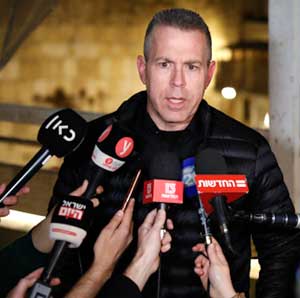 Israeli Security Minister Gilad Erdan gives a statement to the press at the Western Wall in Jerusalem’s Old City on Feb. 6, 2020. Photo courtesy of Olivier Fitoussi/Flash90.

By JACKSON RICHMAN
(JNS) – Jewish and pro-Israel groups reacted positively to Minister of Public Security, Strategic Affairs and Minister of Information Gilad Erdan’s appointment as the Jewish state’s next ambassador to the United States and the United Nations, succeeding Ron Dermer and Danny Danon, respectively.

“I am proud and excited for the privilege of being able to fight on behalf of the righteousness of our path in the international arena, and to defend Israel in light of the challenges ahead,” said Erdan in a statement.

Applause
AIPAC spokesperson Marshall Wittmann told JNS, “We congratulate Minister Erdan, who brings impressive credentials to these important posts. We look forward to working with him to further strengthen the relationship and cooperation between the two countries at the United Nations.”

“[He] is a committed public servant with deep connections to the American Jewish community,” said the Conference of Presidents of Major American Jewish Organizations in a statement. “His most recent postings provide him with extraordinary credentials for representing Israel in the diplomatic arena at the United Nations, and with Israel’s greatest friend and ally, the United States of America.”

B’nai B’rith International CEO Daniel Mariaschin told JNS, “With bias and double standards the rule at the United Nations, Erdan’s unique experience in battling BDS and other issues impacting Israel’s security make him a sound choice for these positions. No question these particular assignments will clearly involve multi-tasking, but that is the general rule in diplomatic assignments.”

“We have always enjoyed a close relationship with Israel’s ambassadors in Washington and at the United Nations. Ambassadors Dermer and Danon have served their country with distinction and honor,” Christians United for Israel founder and chairman John Hagee. “Likewise, we know Minister Erdan well—he, too, is a dedicated and passionate advocate for Israel. We look forward to working with him as he takes on his new and challenging roles.”

Klein said Erdan is “a very hard-working, smart, articulate Zionist who knows how to effectively present Israel’s case and defend Israel from all the propaganda lies against it.” He added that he “was a leader against the Israel-bashing BDS movement and understands all the issues in the Arab/Islamic war against Israel.”

As strategic affairs minister, Erdan carved out a high-profile role in combating the BDS movement. Most notably, Erdan’s ministry was behind a two-year campaign aimed at exposing connections between anti-Israel BDS groups and terrorist organizations.

Time To Leave
Reports have circulated for some time that Danon would be stepping down at U.N. ambassador. He was first appointed in 2015 for a three-year term and was extended multiple times.

Like Danon, Dermer has also been reported to be stepping down from his post as well. However, his tenure was also extended due to Israel’s political deadlock. Dermer has served as Israel’s envoy to the U.S. since 2013.

Erdan has served as a Likud Knesset member since first being elected in 2003; prior to that, he was an adviser to Netanyahu and former Israeli Prime Minister Ariel Sharon. The longtime Likud lawmaker has served in a variety of ministerial roles over the past decade-and-a-half.

According to Haaretz, Dermer will likely step down as ambassador only after the U.S. presidential election in November.

Erdan will continue to serve as a minister in the government until his official appointment as ambassador and take up the U.N. post once the new government approves his nomination.

Israel is set to swear-in its new government on Thursday, May 14.

Suddenly, our Jewish temples are shaking…
Israeli study reveals why some COVID-19 patients do much worse than others