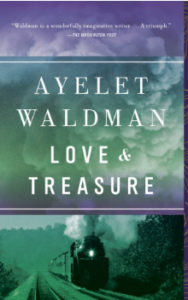 ALBANY–B’nai Sholom Reform Congregation continues its 2018-19 “Synagogue Scholars” series with a book discussion led by Prof. Martha Rozett. She will discuss Love and Treasure by Ayelet Waldman following the congregation’s Friday, Jan. 11, Shabbat service. The service and program will begin at 8 p.m.

Waldman’s historical novel combines interlocking episodes from three times and places: 2013 in America and Hungary; 1945-1946 in an American Army camp in Salzburg; and 1913 in Vienna, where a sexually obsessed Freudian analyst gives the novel a satirical edge. It was inspired by the true history of the Hungarian Gold Train.

A Shakespeare scholar, Rozett’s most recent work is When People Wrote Letters: A Family Chronicle (The Troy Book Makers, 2011), a story told through family letters and autobiographies about the travels and careers of her mother and great aunt and about a romance threatened by the differences between New England Episcopalians and New York Jews. She frequently teaches contemporary historical fiction, including fiction on the history of the Jews, and lectures in the community at Bethlehem Institute for Lifelong Learning and at the Albany Public Library. Rozett earned a doctorate in English from the University of Michigan.

Begun in 2004, the “Synagogue Scholars” series spotlights individuals of the area who are recognized by the congregation as authorities.

Tai Chi held every Monday at Gates of Heaven
After millionaire paid Jews to move to Alabama, couple struggles with new home