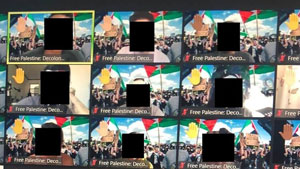 StopAntisemitism.org – A required Zoom lecture at a public university in New York City devolved into a pro-Palestinian protest, as many students and at least one professor “hijacked” the planned curriculum and read out what has been described as anti-Semitic tropes about the conflict in Israel and the Gaza Strip.

A group of Jewish students at the Silberman School of Social Work at Hunter College, CUNY stated they’re now being fearful of returning to campus for in-person instruction in the fall.

During the organized intervention that some say resembled a “Zoom bombing,” many of the nearly 200 participants in the class changed their backgrounds to Palestinian flags and their names to “Free Palestine: Decolonize.” While protesters took turns reading out a manifesto, the chat section was also flooded with comments — one of which said that Israel uses the Holocaust as “a tool.”

“They were totally and completely demonizing Israel, and I was so horrified, I was sick to my stomach. I was so taken aback, and to be honest this is the most anti-Semitic I’ve ever seen with my own,” one Jewish student in the class, who wanted to remain anonymous, told Fox News. “There was absolutely no room for anyone to talk against what they were saying… There was absolutely no voice for anyone pro-Israel at all.”

“The horrifying thing is that there were professors that were expressing their opinions on it,” she added. “They’re supposed to be the mediators in the discussion, not the ones who are fueling the fire.”

“I’m very nervous about the anti-Semitism that I would face going back in person, so being on Zoom is one step farther from the anti-Semitism,” the student said, explaining that she constructed her schedule next semester to remain mostly online. But many courses will return to in-person instruction.

It happened on May 20 in the 9 a.m. session of a course titled “Practice Lab,” which students say is meant to address forms of oppression seen throughout history. Professors met with smaller groups of about 15-20 students throughout the semester until coming together for a final send-off.

Video reviewed by Fox News showed that those involved in the protest for the next 20 minutes took turns reading a lengthy, prepared statement that affirmed, “Anti-Zionism is not equivalent to Anti-Semitism.” Professors did not intervene as protesters praised recent remarks made by U.S. Rep Rashida Tlaib, D-Mich., in which she accused Israel of subjecting Palestinians to a racist, “apartheid” system.