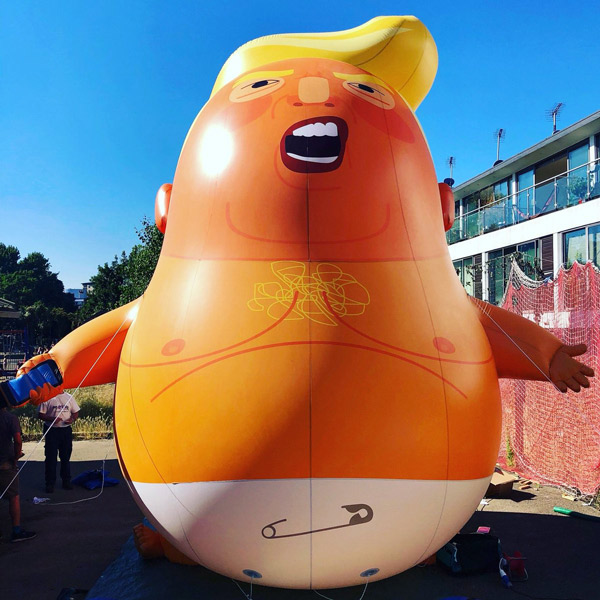 Trump baby before it took flight  over the British Parliament.

DC Report
By Douglas Bloomfield
Donald Trump will be spending about a week in Europe, where he will do battle with America’s closest allies and embrace his nation’s leading adversary.

He Can’t Get No Respect!
If there is a symbol of this trip it is a massive orange balloon that will fly over Parliament while Trump is in England. Dubbed Baby Trump, it’s in the shape of an angry infant Trump in a diaper. It was paid for by thousands of Britons who don’t care much for this president who constantly complains he doesn’t get the respect he deserves, and it has the blessing of London Mayor Sadiq Kahn, who Trump has insulted in the past because of his ethnicity.

The notoriously thin-skinned president — he can dish it out with full bile but can’t take it — cancelled an earlier UK visit at the last minute because Prime Minister Theresa May wouldn’t promise him the friendly, protest-free welcome he wanted from Londoners because, she explained, Britain is a free country.

Trump is unlikely to see his balloon because he is largely avoiding the capital of one of America’s oldest and closest allies, coming into town to spend the night at the U.S. ambassador’s residence and quickly leaving.

Trump is so terrified of protestors that he will be helicoptering around the country to avoid them. He’ll meet Queen Elizabeth at Windsor Castle and the prime minister at her Chequers estate before fleeing to his golf courses in Scotland.

Allies With Hurt Feelings
Trump’s instinctive response to criticism is to lash out. When Canadian Prime Minister Justin Trudeau wasn’t properly deferential, the president called him “meek” and White House aides accused our neighbor to the north of having “stabbed us in the back” and destined for “a special place in hell.” Trudeau responded that the president simply didn’t understand Canadians. “We’re polite, we’re reasonable but we also will not be pushed around.” That was an alien concept for Trump, who apparently took it as a personal insult.

Queen Elizabeth was reportedly warned to be careful what she says privately to Trump because she “cannot trust this guy,” according to Lance Price, media advisor to former PM Tony Blair.  Don’t tell Trump  anything in confidence, she was told, because “you can’t be sure he wouldn’t tweet it five minutes later,” he added.

Trump’s combative style leaves behind raw feelings among America’s friends while he lavished praise on one who may be the world’s most brutal dictator, Kim Jong Un, calling him a “very talented man…very worthy, very smart negotiator…a great honor…very special bond.”  And, most disturbing, “I do trust him.”

Prior to meeting NATO leaders in Brussels he sent everyone dunning letters and tweets chastising them for not meeting their financial obligations to the alliance. He is right but handled it ineptly. It is no secret that fellow leaders consider him rude, poorly informed, undisciplined and worry that he may be a greater threat to NATO than Russia. Many privately suspect that he wants to destroy the western alliance that won the Cold War because he feels Washington would be better off going it alone or in partnership with Russia’s Vladimir Putin.

NATO Partners Worry
The more Trump isolates America from its allies and the rest of the world, the worse it is for Israel.  “America First,” the motto of pro-Nazi groups in the pre-World War II years, could end up meaning Israel last.

Washington’s NATO partners worry he could do in Europe what he did in Singapore with North Korea—cancel joint military readiness exercises with allies to avoid provoking potential adversaries. They fear he may also recognize Russian occupation of Crimea, which they oppose, and cede Syria to Putin, abandoning allies in that war.

Trump may try to bully America’s democratic allies, but he is downright deferential to dictators and despots.

Interestingly, the one western democratic leader he seems to get on best with is Israeli Prime Minister Benjamin Netanyahu. Maybe it has to do with domestic politics or possibly it is a shared affinity for authoritarians. The Israeli leader has devoted considerable energy to courting Putin, who plays a pivotal role next door in Syria.

Bonding With Putin?
Trump meets Putin Monday, July 16, in Helsinki for their first substantive summit, the realization of a longtime dream. The former reality TV star is confident his personal charm and negotiating skills will allow him to fulfill a campaign promise and make friends with the brutal former KGB leader. Whatever comes out of the meeting Trump will declare it the beginning of a beautiful friendship, just as he did when Kim Jong Un took him to the cleaners.

“The president thinks he can be friends with Putin,” former national security adviser H.R. McMaster complained during his time in the White House, according to U.S. officials. “I don’t know why, or why he would want to be,” the Washington Post reported.

Despite overwhelming evidence, Trump accepts Putin’s denial of charges Russia meddled in the 2016 election in an effort to help him defeat Hillary Clinton, for whom they share a loathing. He continues to insist there was no collusion even after so many investigations, indictments and guilty pleas by participants. He has conducted a vicious defamation campaign against the special counsel, the FBI, his own attorney general, all Democrats, assorted Republicans and the media.

Trump’s deference to Putin raises the question: what’s he scared of?

What does the Russian leader have on him? Are there financial dealings and entanglements? Trump’s son has spoken of extensive business ties in Russia. Is that the real reason why he broke his campaign promise to release his tax returns? What is the extent of Trump family financial dealings with Russia? How do his boasts of wealth and success compare to reality?

Maybe his deference to dictators is fear, the knowledge that he cannot bully them because they can do great damage. They are the patrons of terrorists, mass murderers, subversive movements, the suppliers of weapons and missiles to the most nefarious, builders of nuclear weapons and cyber villains who could alter an election.

Some may also be his business partners and creditors.

Emmys 2018: The Jewish nominees, from ‘Marvelous Mrs. Maisel’ to ‘Game of Thrones’
New bill will end Israeli imports of live animals for meat, in light of suffering