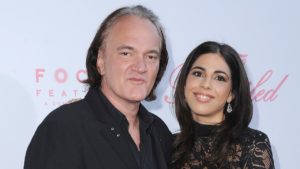 Quentin Tarantino and Daniella Pick arrive at the U.S. Premiere Of “The Beguiled” at Directors Guild Of America on June 12, 2017 in Los Angeles, California. (Photo by Jon Kopaloff/FilmMagic)

The couple started dating in 2009 when the 54-year-old Tarantino was visiting Israel to promote his movie “Inglorious Basterds.” They later broke up, but were seen together again in 2016, according to Ynet.

Tarantino, who is of Italian, English and Irish ancestry, won the Academy Award for best screenplay for “Django Unchained” and “Pulp Fiction” while directing both films.