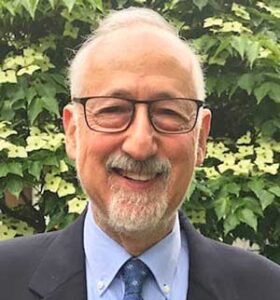 ALBANY– Barbara Devore, B’nai Sholom Reform Congregation president since 2018, has announced that the congregation has welcomed Rabbi David Katz of Baltimore as its new interim rabbi.

Katz’s appointment was approved by the congregation at the 48th annual meeting, held June 18, and took effect July 1. The annual meeting was conducted online via Zoom due to COVID-19 restrictions.

Katz succeeds Rabbi Donald P. Cashman, who retired after 35 years as B’nai Sholom’s spiritual leader, teacher and guide. Cashman has been named the congregation’s rabbi emeritus in honor of his more than three decades of service.

“Rabbi Katz’s experience helping congregations transition to a permanent rabbi and his warmth, sense of humor and commitment to learning will be invaluable as we move forward,” said Devore.  “He has strong skills in the development of congregational relationships, and B’nai Sholom is excited to have the opportunity to learn, pray and develop a relationship with Rabbi Katz and with his family.”

Devore explained that as interim rabbi, Katz will serve as a transitional “bridge” to provide time for B’nai Sholom congregants to explore, experiment and determine what the congregation has become, the path it wants to follow and what qualities it wants in its long-term rabbi. Typically, an interim rabbi serves in the position for one year.

Katz was ordained in 1981 and awarded the Doctor of Divinity degree from Hebrew Union College in 2006.  He has 39 years in the rabbinate, including service to seven congregations as an interim rabbi. He has authored articles and is the co-editor of Reading Between the Lines: New Stories from the Bible. He served on committees that developed Mishkan T’filah, the newest Reform Judaism prayer book, published in 2007, that is used in synagogues throughout North America.  Katz also developed the “Moments” Engagement Program, a way of organizing congregational life to assure successful attendance at every program, service and event.

Katz has served on the boards of the Central Conference of American Rabbis and National Association of Temple Educators and as president of New York Area Reform Rabbis. He has garnered multiple honors, and awards from Hebrew Union College-Jewish Institute of Religion for scholarship, community service and human relations. Katz also earned degrees in theatre from Northwestern University.

Katz, a native of Rochester, and his wife, Nancy, an artist, report that they appreciate the natural beauty and resources of upstate New York. Their daughter, Emily, is executive director of “Justice for Kurds” and founder of Hampstead Rose, a consulting firm specializing in international cross-cultural projects. Their son, Benjamin, is a harpsichordist and composer.