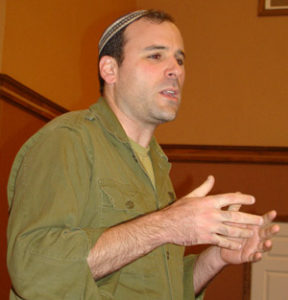 SCHENECTADY–On Friday, Nov. 9, and Saturday, Nov. 10, Congregation Beth Israel will sponsor a scholar in residence weekend, with guest speaker Rabbi Shalom Hammer, an Israeli-American career officer in the IDF. He will present three lectures, culminating with the annual Jack Lauber Memorial Lecture. A traditional Friday night dinner and a Shabbat lunch will be offered as part of the program.

Hammer served in the rabbinate division of the Israeli Defense Forces, and now serves as a lecturer for the identity branch of the IDF. His mission is to provide secular Israelis with education about Jewish ideas and foundations. He established Makom Meshutaf, an organization that advocates tolerance and unity between religious and secular Jews. A lecturer for the Israel Government Fellows of the Menachem Begin Heritage Center and a contributing writer for the Jerusalem Post, he is the author of five books and a guest lecturer for communities throughout the diaspora, including the United States, UK, South Africa and Australia.

Born in Queens, he received his ordination from Yeshiva University and earned a bachelor’s degree in speech and communication, and master’s degree in education from Azriela Graduate School. He and wife made aliyah in 1990 and now live in Jerusalem with their six children.

Shabbat dinner at 5:30 on Friday, Nov. 9, will be followed by Hammer’s presentation  “To Life L’Chayim! Judaism’s Greatest Commodity,” and during Saturday lunch, after Shabbat services, he will present “Why Can’t We Get Along? Interdenominational Dialogue.”  The featured topic of the Jack Lauber Memorial Lecture, Saturday evening at 7 p.m. is “Like Dreamers: When a Jewish Dream Becomes a Reality.”

Lauber, died in 2010. He was a long-time member of both Congregations Agudat Achim and Beth Israel, and served as the president of the latter’s men’s club. Listed in “Who’s Who In Environmental Engineering,” he was chief of technology for the NYS Department of Environmental Conservation, pioneering environment preservation and publishing articles on recycling, energy conservation and pollution. He had over 40 years of experience in air pollution and toxic contaminate control, thermal treatment, waste to energy, and industrial hygiene. As a committed and active Zionist, he brought his knowledge to Israel where he was a consultant to the Israel’s Division of Air Pollution, and lectured at the Technion and Ben-Gurion University. He founded the Zionist Forum website, and was a member of Americans for a Safe Israel. He also served as Hillel advisor at the University at Albany.  The lecture is endowed by Ruth Lauber and family.

The cost for the Friday dinner is $25 per adult, and $15 for children under 12. The Shabbat lunch will cost $15, with $12 for children. Both meals include the Lauber Lecture. The Saturday night lecture alone will cost $10.  For those attending both meals, the cost will be  $35 for adults and $18 for children.

Reservations are required by Thursday, Nov. 1. Organizers requests that checks be made payable to Congregation Beth Israel, 2195 Eastern Pkwy., Schenectady, 12309. Debbie Gatoff at 518-374-0685, or debbiegatoff@gmail.com can provide details.