Rabbi Shmuley: We Do Not Forget — President Trump Promised Jerusalem 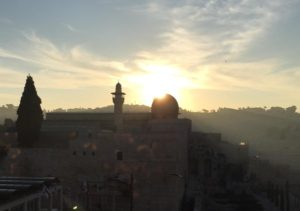 This Sunday, I will be flying to Israel immediately after the gala dinner of our organization, the World Values Network. I am going to attend the 50th anniversary of Jerusalem Day, when Israel reunified Jerusalem in the 1967 war, affirming the Jewish people’s rebirth in their ancient capital after the devastation of the Holocaust.

President Donald Trump will be there, too. During his campaign, he made a commitment to recognize Jerusalem as Israel’s capital, and move the U.S. embassy there from Tel Aviv.

In addition, the Republican Party platform at last year’s convention said: “We recognize Jerusalem as the eternal and indivisible capital of the Jewish state, and call for the American embassy to be moved there in fulfillment of U.S. law.”

President Trump is being pressured from many sides to renege on that pledge. But he must resist the naysayers and do what he knows in his mind and heart to be the right thing for America and for our foremost ally, Israel.

Barack Obama did good things for the Jewish state, including stepping up military and economic cooperation, as Israel repeatedly acknowledged. There was little good, however, about his policies of paying ransom to the genocidal Iranian regime,;or providing funding to the Palestinian Authority so it can pay salaries to terrorists; or doing nothing after Syria’s tyrant gassed his people.

President Trump did the right thing in attacking the Syrian tyrant following the latest chemical weapons attack, in telling Mahmoud Abbas he must stop paying terrorists, and in denouncing the catastrophic nuclear deal with Iran. But more must be done — and the Jerusalem Embassy move is especially long overdue.

It is outrageous that out of the 190 nations America has diplomatic relations with, Israel is the only one whose capital is not recognized by the U.S. government.

More than 20 years ago, in 1990, Congress passed a resolution declaring that “Jerusalem is and should remain the capital of the State of Israel” and “must remain an undivided city in which the rights of every ethnic and religious group are protected.” Five years later, Congress overwhelmingly passed legislation reiterating that position and requiring the U.S. embassy in Israel to be moved no later than May 1999. The Jerusalem Embassy Act passed the Senate by 93-5. The most famous Democratic Senators of the time all voted for it, including Senators Joe Biden (D-DE), John Kerry (D-MA), Harry Reid (D-NV), and Dianne Feinstein (D-CA).

It is now May 2017, and the embassy remains in Tel Aviv. Trump’s predecessors, despite pledging during their campaigns to move the embassy, repeatedly signed waivers that allowed them to ignore the legislation on grounds that delaying would be in the national security interests of the United States. Trump is now being asked to sign a similar waiver to frustrate the will of Congress and to break a central campaign promise, once again.

He is being told the embassy cannot be moved because it might provoke outrage in the Muslim world and violence in Jerusalem. That is blackmail and the United States cannot give in to such threats. We cannot allow others to dictate what should and should not be sovereign U.S. territory. And no one should be making threats to the most powerful and righteous nation on earth without assuming there will be serious consequences.

Furthermore, the Muslim world should not be treated with such disrespect. We should not take the paternalistic view that Muslims cannot understand that Jerusalem has long been Israel’s capital and that the United States is the Jewish state’s closest ally. Reinforcing our special relationship by moving a building should not be seen as a provocation or retreat from our friendship with Arab and Muslim nations.

Furthermore, Muslims in the Middle East have far more serious concerns that, unlike U.S. policy toward Jerusalem, directly affect their lives. They suffer deprivations and persecution in many of their own countries. Shiites and Sunnis are at war throughout the region. Iran is threatening the well-being of Muslims throughout the area as well as the leaders of several Arab countries. Muslims are dying daily in fighting in Iraq, Yemen, and Syria. Will all of these problems evaporate with the relocation of our embassy? Will the ongoing conflicts stop so Muslims can redirect their anger toward the United States and Israel?

Radical Islamists want to destroy our way of life and nothing we do – or don’t do – will change their agenda. Furthermore, the best way to prevent violence is to show we will not give in to threats, and to send a clear message to the provocateurs in the Palestinian Authority and elsewhere that we will not tolerate any actions on their part to incite violence.

Moreover, moving our embassy will not harm the peace process. The opposite is true. By making clear the United States position that Jerusalem should remain unified under Israeli sovereignty, unrealistic Palestinian expectations regarding the city can be moderated, and thereby enhance the prospects for a final agreement.

Despite the outrageously biased UN Resolution 2334, supported by Trump’s predecessor, Israel will not compromise its sovereignty over its capital. It will never give up Judaism’s holy places. It will not allow the Palestinian Authority or its supporters at UNESCO to erase the history of the Jewish people from their homeland.

There is no better time than President Trump’s upcoming visit to Jerusalem to declare that, a he promised during the campaign, he will move the U.S. embassy to Israel’s eternal capital. Doing so will help him domestically by demonstrating that he is indeed a man of his word. It will help him internationally by showing that he cannot be intimidated by threats. It will advance  his interest in peace by sending a message to the Palestinians that he stands by Israel and will not capitulate to their demands or force Israel to do so. Showing his commitment to Jerusalem will also restore the confidence of the people of Israel that the United States has their back. Finally, standing up for American values and correcting a historical wrong will be a part of his presidential legacy, which will earn him the gratitude of the Jewish people and the respect of all Americans.

Last month, on Holocaust Memorial Day, President Trump spoke movingly about the memory of the six million Jews murdered in the Second World War. He praised genocide’s foremost witness, Elie Wiesel, as “a great man” whose “absence leaves an empty space in our hearts, but his spirit fills this room.”

This Sunday, at the World Values Network gala, Professor Wiesel’s son, Elisha, will be reciting the very last Kaddish — the Jewish prayer for the dead — for his father. Immediately after that, I will leave for Israel.

We Jews do not forget. We have mourned the destruction of Jerusalem for thousands of years. President Trump has a unique opportunity to turn that mourning into the joy of celebration when he, too, arrives in Israel. He can, at a unique moment in history, move the U.S. embassy to Jerusalem and confirm its permanence as Israel’s capital.

It is an opportunity he must not decline.

Rabbi Shmuley Boteach whom The Washington Post calls “the most famous rabbi in America” is the founder of The World Values Network and is the international best-selling author of 31 books, including his latest, “The Israel Warriors Handbook.” Follow him on Twitter and Instagram @RabbiShmuley.

The bumpy road to Jerusalem (whose Jerusalem?)
Are we facing decay of small-town life?