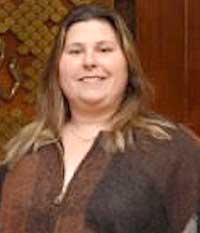 ALBANY–Temple Israel President Gary Ginsburg has announced that Rachael Schertzer has been named the new executive director of the Conservative congregation on New Scotland Avenue.

“I am very excited to step into this new role and to help move Temple Israel forward,” said Schertzer. “Temple Israel has been a community institution and leader for 72 years, and I am honored to be a part of this shul. I look forward to speaking with our members on how the main office can provide the services, programming, and support they all deserve.”

Schertzer (nee Woren) grew up in the Albany area and has been an active member of the Albany Jewish community. She was a member of NCSY, a high school youth group, and active with Shabbos House while she attended the University Albany. She served in leadership capacities for both groups. She earned her bachelor’s degree in Judaic studies from the University at Albany in 2008, her master’s degree in teaching Hebrew from Brandeis University in 2009, and also graduated from the Middlebury Vermont Hebrew Immersion Program in the summer of 2009.

Schertzer returned to Albany and worked at the Hebrew Academy of the Capital District and  has served as Temple Israel’s program director and as Temple Israel’s Camp Givah’s assistant director. She is a member of the Jewish Federation of Northeastern New York’s Board of Directors, is the immediate past chairwoman of its NextDor Cabinet, JFed’s Young Adult group, and was the 2009 recipient of the Myrtle F. Berman Covenant Award.

Schertzer and her husband, Rob, will welcome their first child in the coming weeks.

Rachael Schertzer may be e-mailed at TIDirector@TIAlbany.org.