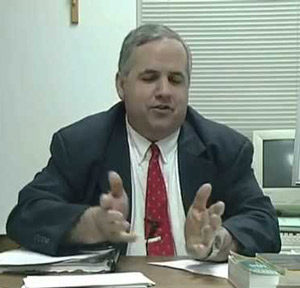 NEW YORK CITY (JTA) –A candidate for Congress in the Cincinnati, Ohio, area is running/ ran a radio spot that says TV networks are controlled by “billionaire Communist Jews” and that “anti-American” Jews control the computer election vendors and thus close elections.

The commercials for Jim Condit, Jr. were aired on two local Cincinnati AM radio stations, WLW and WKRC, beginning on Thursday morning, days after the attack on a Pittsburgh synagogue that left 11 worshippers dead.

“These massive Trump crowds are the real polls. Not the fake lying polls put out by the big TV networks all controlled by billionaire Communist Jews. These same anti-American Communist Jews like George Soros also direct the three computer election vendors, which have connived their way into counting 95 percent plus of our votes on their secret computer programs, with no effective checks and balances,” the one-minute ad said, in part. “They fix close elections if they think they can get away with it.”

The ad ran nine times on Nov. 1 and was scheduled to run 26 times.

The stations’ program manager, Scott Reinhart, told the Cincinnati Enquirer that federal law prohibits the stations from refusing candidates’ ad time, even if the ad is racist or anti-Semitic.

Condit reportedly has previously denounced “Zionist” control of world politics and alleged that Jews played a role in the 9/11 attacks.