Reliving the massacre every minute: How Pittsburgh survivors are struggling a year later 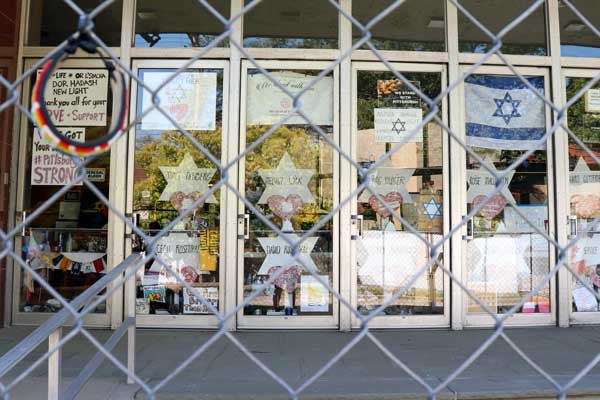 The doors of the Tree of Life synagogue feature memorials surrounding the building nearly a year after the attack there that killed 11 worshippers. Photo courtesy of Grace Yagel.

By BEN SALES
PITTSBURGH (JTA) – As this city’s Jewish community celebrated Rosh Hashanah this week, the Tree of Life synagogue stood closed, its doors blocked by a chain-link fence.

A brown, wilted wreath hung on a tree near the synagogue, where a gunman killed 11 worshippers last year in the worst anti-Semitic attack in American history. Jewish stars bearing the names of the victims are taped to a glass door at the front entrance, behind a fence and under an Israeli flag and a sign thanking first responders. A makeshift wooden sign on a barricade next to the building reads “No day shall erase you from the memory of time.”

An Empty Shul
The synagogue is built to welcome hundreds of Jews. But the only person to enter regularly now is a custodian who maintains the building while the three congregations that meet there decide what to do. Tree of Life has been shuttered since the attack.

“I hope it’s torn down,” said Ellen Surloff, who was president of one of the congregations, the Reconstructionist Dor Hadash, at the time of the shooting. “I don’t think that I could ever go back in that building and not be continually reminded of what took place there.”

Signs of the attack remain everywhere in Squirrel Hill, the quiet, warm, tree-lined community that has been the home to Pittsburgh’s Jews for more than a century, and which otherwise feels idyllic as summer turns into fall. 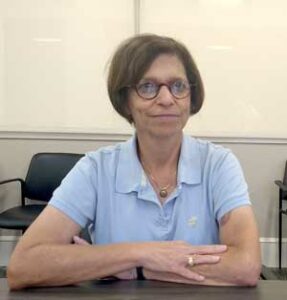 Ellen Surloff, who was president of the Dor Hadash congregation at the time of the shooting, was consumed for months afterward dealing with its aftereffects. Photo courtesy of Ben Sales.

“Hour By Hour”
Local businesses display a sign created shortly after the attack that reads “Stronger than Hate” alongside a yellow Star of David and blue and red diamonds — the city’s traditional colors. The kosher supermarket hangs a banner with the names of the 11 victims. The local Starbucks has three large hearts painted on its windows with the words “love,” “kindness” and “hope” painted in Hebrew and English on each one.

As the first anniversary of the Oct. 27 attack nears, bearing up has become especially difficult. The shooting’s survivors and the rest of the community are just trying to get through the High Holidays — the busiest time of the Jewish calendar, when Jews are traditionally called to account for their souls.

“We’re figuring it out an hour at a time, a day at a time, what to do,” said Rabbi Jeffrey Myers of Tree Of Life*Or L’Simcha Congregation at a recent news conference organized by the community.

As the shooting began, Myers dialed 911 from his cellphone and then rushed to protect his congregants.

“I live with Oct. 27 every minute of every hour of every day, and I will for the rest of my life,” he said. “Each of us finds the strength and courage to integrate what happened into our beings, to move forward.”

Every month, survivors of the Tree of Life shooting get together in a room to process their feelings. Many of them live next to each other in Squirrel Hill, and they can relax and schmooze about everyday life.

At the meeting last week, however, the conversation turned to the mechanics of getting past October. Some survivors attended Rosh Hashanah services in the neighborhood and will go to memorial events. Others will not, concerned that the communal prayers will be too painful. One person decided to leave home and rent an Airbnb for the weekend of Oct. 27 to avoid reporters who might come knocking.

There have been signs of progress, too. One survivor realized that 11 months after the attack, they could finally relax — a little. For the first time that year, the survivor didn’t feel the need to constantly monitor those who were entering and exiting the room.

Moving Forward
“One of the people there had this aha moment and said, ‘I need to tell you all something: I am sitting with my back to the door,’” said Lulu Orr, the clinical specialist and care navigator from the Jewish Family and Community Services of Pittsburgh, who did not discuss the survivors’ personal details in order to respect their privacy. “They’re the only ones who experienced what they experienced. They support each other. They laugh with each other.”

Beyond the circle of survivors, the congregations that lived through the shooting are also figuring out how to move forward.

As needed, they are training people for the ritual chanting and prayers that used to be led by those who were killed. Rabbi Jonathan Perlman, who leads the Conservative New Light Congregation and survived the attack, composed a prayer in remembrance of the victims to be read during a section of the Yom Kippur service that commemorates Jewish martyrs throughout history.

Survivor’s Guilt
“Like all the others, he did not deserve to die,” Perlman said at the news conference speaking of Melvin Wax, a congregant who was killed and remembered as a devoted grandfather, passionate baseball fan and energetic community volunteer. “That’s survivor’s guilt.

“I go through these scenarios in my mind, and I think a lot of other victims do, too, about I could have done more, I could have saved people, why did this person choose to do x, y and z, why did they turn the other way. And it’s part of the trauma, and it’s part of being human. You carry those kinds of things with you.”

Dor Hadash met for Rosh Hashanah in the local Jewish community center, with survivors of the shooting in attendance but a new person blowing the shofar. The usual shofar blower, Jerry Rabinowitz, was killed in the attack. Daniel Leger, who was injured, will be speaking to the congregation on Yom Kippur.

Surloff, the Dor Hadash president, was not at the synagogue when the gunman entered: She was feeling sick and came late. She recalls seeing a row of police cars surrounding the building.

When Surloff told a policewoman, “I have to go, that’s my synagogue,” the officer gave her a hug and did not let her pass. The synagogue leader later found out that Rabinowitz, a mainstay of the congregation, had been killed.

“Not only was he such an integral part and member of the congregation, but he was also a really important part of the congregation at the time of the High Holidays,” Surloff said. “Jerry was in charge of the greeting and ushering. You walk in the door and there was Jerry with his smiling face.”

10/27/2018
Some community members and survivors said that amid the stream of commemorative events, logistical decisions and media interviews, they have not had time to even begin processing the shooting. A few refer to the day as “10/27,” giving it a name similar to 9/11.

Surloff said that the four months after that day were consumed with meetings on everything from insurance claims to finding a new prayer space to writing thank-you notes to those who had reached out after the shooting.

“They’re all feeling anxious about the upcoming High Holidays, as well as the commemoration,” Orr of Jewish Family and Community Services said about the attack survivors. “This past year has been very public, and they really believe that Oct. 28 of this year will be the first day of their grief journey.”

5779: The North American year in review through August 2019
The working parents’ collective apology on Yom Kippur