Richard Gere on channeling his ‘inner schlub’ in ‘Norman’ 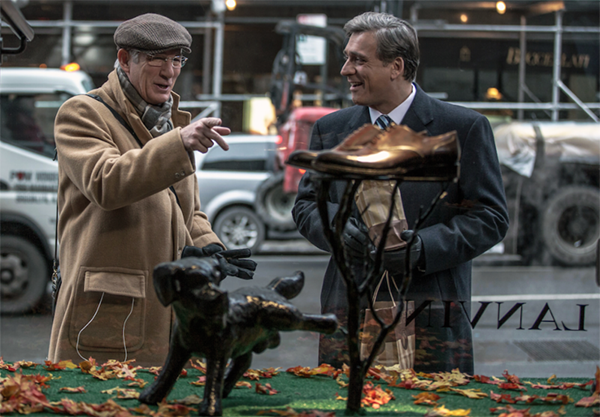 A scene in the new movie “Norman: The Moderate Rise and Tragic Fall of a New York Fixer” featuring Richard Gere, left.

He’s been the star of a constellation of films, from “American Gigolo” to “Pretty Woman,” “An Officer and a Gentleman” to “Primal Fear.” At 67, the onetime People magazine Sexiest Man of the Year (1999) still has the looks and charm of a leading man.

So what is Richard Gere doing playing the title role in “Norman: The Moderate Rise and Tragic Fall of a New York Fixer”? His character, Norman Oppenheimer, is neither sexy, nor suave, nor tough. He’s a loser, a sad sack, a Sammy Glick wannabe who would “get it for you wholesale” for a favor in return.

Finding His Inner Schlub
As it turns out, Gere asked the same question before accepting the role, he told JTA in a telephone interview.

Gere explains he was a fan of the film’s Israeli director, Joseph Cedar. But before signing on, “I said I want to ask you a question first: ‘Why me? There are a lot of wonderful Jewish actors in New York,’” he said. “He told me, ‘That’s true, but I want people to see this character through fresh eyes. I want them to see it through your eyes.’

“It was a brilliant script, so I said OK,” he added. “I didn’t know what I was going to do with it. I worked on it close to a year.”

“I had to find my inner schlub to play Norman,” Gere said with a laugh.

“There was something about what Richard brings to this character that didn’t exist before [in the screenplay],” Cedar said. “He came with the ability to be naive and scheming, charming and repelling. Movie stars don’t usually go this low.”

By “low,” Cedar means plunging into the depths of a character who is so complex — a plotter and schemer who at the same time is somehow good at heart. He isn’t so much evil as he is delusional — convinced that he’s just one deal away from success.

In the film, when we first meet Norman, he appears prosperous, dressed nattily in an expensive-looking suit and camel-hair overcoat. He’s walking down Manhattan streets, a cellphone plastered to his ear, ostensibly making deals. But we soon see appearances are deceiving — Norman is a hustler about whom we learn little.

He refers at times to a deceased wife and a child, but we’re not sure they exist. He doesn’t seem to have a home or office. All he seems to have is a pathological, almost shark-like need to keep moving forward, on to the next deal, the next promise, the next lie.

“As you see in the movie, he’s a steamroller,” Gere said. “Nothing will stop him.”

Shortly after the film begins, Norman follows Micha Eshel (Israeli actor Lior Ashkenzai) from a conference. Eshel is Israel’s deputy minister of trade, but feels at a low point of his career. Claiming mutual friends and acquaintances he doesn’t really have, and perhaps sensing Eshel’s vulnerability, Norman imposes himself on Eshel in front of an upscale haberdashery, convincing the Israeli to accept a gift of a very expensive pair of shoes he’d admired.

A Change In Circumstance
Three years later, Eshel has been elected Israel’s prime minister, and when they meet at a reception in New York City he greets Norman warmly. Eshel’s staff is wary, but he seems to only remember the sympathetic and generous man he had met earlier.

That connection changes Norman’s life; suddenly he is welcomed in circles where he had been shunned. As he says in the film, “For once I bet on the right horse.”

Emboldened by his sudden popularity, Norman makes promises he can’t keep. To his rabbi — that noted Yiddish actor Steve Buscemi — he pledges to raise the millions needed to refurbish and save his synagogue. To his nephew, Philip Cohen (Michael Sheen), he offers to arrange a synagogue wedding for his interfaith marriage.

But for Norman, every silver lining has a cloud. He brags about his “shoeish” gift to an Israeli he meets, unaware that she is an operative of the Israeli Justice Department. This leads to a chain of events that threaten Eshel’s political career, as well as Norman’s dreams.

Cedar was reimagining the story of the court Jew — someone who offers a favor to a powerful man, becomes powerful himself and creates resentment in a society that’s already anti-Semitic. But the story has echoes of the current corruption investigation of Israeli Prime Minister Benjamin Netanyahu.

Opinionated Actor
For the record, promoting the film during its Israeli premiere earlier this month, Gere suggested that the cigars and other gifts Netanyahu allegedly received are “no big deal” if the prime minister can come up with a peace plan.

“There’s no defense of this occupation,” Gere told Haaretz in an interview published March 12. “Settlements are such an absurd provocation and, certainly in the international sense, completely illegal — and they are certainly not part of the program of someone who wants a genuine peace process.”

For his part, Cedar has a more personal connection to a court Jew story. Four years ago, Cedar’s uncle by marriage, American Rabbi Morris Talansky, gave then-Jerusalem mayor (and later Israeli prime minister) Ehud Olmert  “cash-stuffed envelopes,”and then testified against him during Olmert’s bribery trial in 2013.

Cedar insists there was no connection between that and his script, but it might explain why this potentially pathetic character was so sympathetically drawn and played.

“Every once in a while I feel like a Norman,” Cedar said. “That was the motivation behind the whole project.”

Negative Jewish Character
“All the problems this guy faces, all the slights he faces, there really is no anger in him,” Gere said of his character. “When I first started playing him, I thought there’d be more frustration.”

While at times Norman is sympathetic, he is nonetheless a negative portrayal of a Jewish character. Given the times, I asked Gere if he had any qualms about taking the role.

“I mean, it’s a complicated thing,” he said, pausing to gather his thoughts. “This was written by a scholarly Jewish writer-director [Cedar]. He’s an intuitive writer and the story of the court Jew is really important to him.

“I was always asking him, ‘Does this feel right to you?’ and he kept reassuring me. I didn’t want to be the cliche Jew and I worked hard to avoid that.”

Gere is famously a Buddhist; he’s both follower and friend of the Dalai Lama. Buddhism, he said, “impacts everything I do. I always ask myself, ‘Why are you doing it?’ If the answer is money, that’s probably not good enough. I have a daily commitment to do something spiritual.”

I mention the late Leonard Cohen, who seemed to have embraced both his Judaism and Buddhism.

“Some of the very best Buddhists are Jews because of their analytical approach to life,” Gere said. “The Jewish mind is an inquiring mind. I can’t tell you why that is. There is a fearlessness in examining things. Buddhism is not a religion, but a philosophy of deep exploration.”