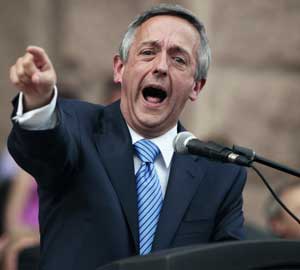 By RON KAMPEAS
WASHINGTON (JTA) –Robert Jeffress, a pastor who has said Jews and other non-Christians were destined for hell, was a guest at one of Donald Trump’s Chanukah parties.

Jeffress, who is pro-Israel, was invited to Trump’s signing of an executive order on that would withhold funds from schools that allow anti-Semitism on their campuses, including some forms of anti-Israel activity. The White House Chanukkah parties were on the same day.

“Robert Jeffress, I see you right here,” Trump said at the first of two parties. “And what a tremendous faith leader you are and a tremendous man you are. Pastor, thank you for being here so much, also. We appreciate it.”

Jeffress has preached for years that non-Christians (which includes Mormons, according to his theology) may be good people, but nothing but the acceptance of Jesus as God saves one from an eternity in hell.

Sen. Mitt Romney, R-Utah, called out the Trump administration last year for inviting Jeffress to give the convocation at the opening of the U.S. Embassy in Jerusalem. In his defense at the time, Jeffress said his views were commonplace among evangelical Christians.

Jeffress posed for a photo at the party with Alan Dershowitz, a leading pro-Israel advocate and prominent attorney. Trump is thinking of adding Dershowitz to his impeachment defense team.