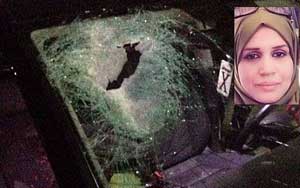 By MARCY OSTER
JERUSALEM (JTA) — Israel’s Defense Ministry has recognized as a terror attack an incident in which a Palestinian mother of nine was killed by a thrown rock at her car.

But since the woman, Aisha Rabi, is not an Israeli citizen, her family will not receive compensation from the National Insurance Institute, Ynet reported.

Rabi, 47, was killed at the Tapuah Junction in the northern West Bank in 2018 when a rock thrown at the car driven by her husband struck Rabi in the head. Her husband said that the rocks were thrown from near a Jewish settlement and that he heard people speaking Hebrew, though he did not see them. The couple’s 9-year-old daughter was also in the car.

A 16-year-old from the Pri Haaretz Yeshiva in the West Bank settlement of Rehalim was arrested and charged last year with manslaughter, aggravated stone throwing at a moving vehicle, and intentional sabotage of a vehicle. He remains under house arrest. A judge said at the time of the teen’s indictment that his DNA was found on the rock that smashed through the car’s windshield.

A guilty verdict on manslaughter could carry a sentence of up to 25 years in prison, though the term could be mitigated for a minor.

Rabi’s family will appeal the decision against compensation, and could appeal to Israeli authorities to demolish the home of the alleged teenage attacker if he is found guilty.