Roseanne Barr defends her Valerie Jarrett tweet, then veers even further off script at rabbi event 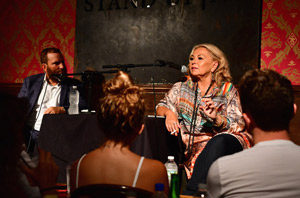 Recently at a comedy club here, the Jewish actress and comedian talked about plenty of random things while defending the bizarre tweet she aimed at Valerie Jarrett in May. Barr, 65, appeared in a conversation with the prominent Rabbi Shmuley Boteach at Stand Up NY on Manhattan’s Upper West Side.

She had told Boteach in an earlier podcast that she regretted the tweet, in which she mocked Jarrett, a former adviser to President Barack Obama who is African-American. The tweet said the “muslim brotherhood & planet of the apes had a baby=vj.”

The comment drew wide criticism and led ABC to cancel the hit reboot of her sitcom “Roseanne.”

Instead of sounding remorseful during the program, Barr said the tweet had been misunderstood.

“You apologized to her because you recognized that you had wronged her?” Boteach asked Barr, who had reached out to Jarrett following the controversy.

“Well, I recognized that she thinks I wronged her,” Barr replied. “I’m sorry that anyone thought that was a racist and not a political tweet.”

Odd Comments
As the conversation jumped from topic to topic, Barr made several comments that were borderline incoherent.

“I made a vow at 3 that I would always fight against extremism because that doesn’t allow for Jews,” she said at one point. “Places where Jews are free are way better places than places where Jews are not free, and same for women, blacks, brown people, Asians, everybody.”

When Boteach mentioned that he had invited her to dine at a kosher restaurant following the event, Barr said that she “would have a Nathan’s hot dog in a heartbeat.” The popular hot dog brand is not kosher.

“My mom would eat hot dogs for all five meals per day,” she added.

Earlier in the day, Barr appeared on Sean Hannity’s Fox News show and claimed the tweet was not racist and she was not aware that Jarrett was African-American when she wrote it.

The Jarrett tweet wasn’t the first time that Barr has drawn criticism for her social media usage. On Twitter, she has promoted conspiracy theories and posted comments criticizing transgender people. Some have also taken issue with Barr for her vocal support of President Donald Trump.

In the conversation with Boteach, some of Barr’s comments on Judaism left this reporter stumped. She spoke about her love of Sephardic Judaism, describing it as “source Judaism, it’s about the Earth.” She did not elaborate on the connection.

Barr also said that she liked the Book of Esther because of her love of Sephardic Judaism. Though the book, which is read on Purim, tells the story of how Esther rises to become the Queen of Persia, it is part of the canon for Jews of all backgrounds.

Vitamin Deficiency
She seemed to blame the tweet about Jarrett on a vitamin deficiency.

“I didn’t have any Vitamin B because I can’t absorb minerals, so I was terribly emotionally unbalanced, and I felt myself to be so, and I told ABC that I knew I needed to get my meds checked because I knew I was in trouble. So there’s that,” the comic said. “And I wasn’t completely coherent when I woke up at 2 and wrote that tweet.”

Boteach—an author, speaker and adviser to several celebrities—praised and defended Barr throughout the event.

“You’re a very high-profile Jewish woman who speaks about the Torah openly and unashamedly, and defends Israel unashamedly — very rare in Hollywood,” he said.

Boteach mentioned his and Barr’s admiration for the Rev. Martin Luther King Jr. several times, seemingly as a defense against claims of racism.

As the night came to its conclusion, the rabbi praised Barr for apologizing in their podcast interview.

“The humility you showed in saying sorry for a mistake I thought was a phenomenal affirmation of Jewish values, and I told you at the time,” Boteach said. “I said that you had made a kiddush Hashem, that you had sanctified God’s name by saying you were sorry, and you did so in the name of Judaism, in the name of penance.”