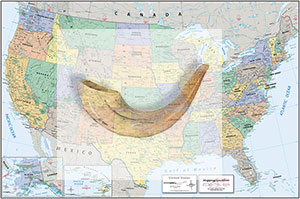 By MARVIN D. NATHAN and JONATHAN A. GREENBLATT
Rosh Hashanah, the Jewish New Year, is both a celebratory holiday and a time for serious introspection. It is a celebration of the creation of the universe and of God’s sovereignty over that universe. And, it is a time to look into oneself to examine where one has been and where one is going.

In this spirit, we offer on behalf of The Anti-Defamation League (ADL), the organization we represent, some words of celebration and introspection as Americans, as Jews and as human beings.

This has been a year of great turmoil, here and abroad, so it is easy to forget that there is much we have to celebrate.

As Americans, we have seen a number of institutions of our democratic society rise to the occasion. We have seen the courts, reflecting our constitutional separation of powers, putting a hold on the discriminatory travel ban against Muslims. We have seen the media doing their job to raise serious questions and do in-depth investigations on how we are being governed, even as they are attacked by some as “enemies of the nation.” And we see non-governmental organizations engaged and active, living up to Alexis de Tocqueville’s description of America’s great strength, its voluntarism in civil society.

As Jews, with all the divisions and questions about Israel and its policies, we should never take for granted the remarkable reality of a strong and vibrant Jewish state, one that in its democracy, every day remains distinctive in a region characterized by anti-democratic forces on both the religious and secular sides.

And for those who worry about Israel’s soul, it is worth reading recent stories in both The New York Times and The Washington Post, as to the humanitarian assistance Israel is delivering to thousands of Syrian refugees and injured as a result of the ongoing Syrian conflict. Remembering that Syria has been one of Israel’s leading foes since Israel’s founding makes these facts even more inspiring.

Here in the United States, as anti-Semitic incidents and expressions rose significantly, it was heartening that Americans both on the right and the left stood up in support of our community.

Even as questions arose about American leadership in the world and the potential diminution of the State Department, we are thankful that the critical position of special envoy on anti-Semitism, created by the George W. Bush Administration, remains intact.

Rosh Hashanah, also gives us a chance to reflect on those elements of our lives that are challenging and may need repair.

The actions that have undermined democratic values and institutions — the attacks on the press, the Muslim travel ban, the loss of protections for immigrants and refugees, the assault on voting rights, the step back on LGBTQ rights, the questioning of science — all put stresses on our system. Protecting democratic values and institutions is not a partisan issue. These are the things that truly make America great. We must all rally round to ensure their protection.

We are deeply troubled by the surge in anti-Semitic incidents over the last year and the emboldening of Jew haters to come out of the shadows and proudly proclaim their vile beliefs as witnessed in Charlottesville. And we saw hate crimes rise against people of many different backgrounds in many different communities.

Finally, as Americans and as Jews, we deeply worry about the question of American leadership in the world. The history of the 20th century is one where when America is in retreat from the world, as we were between the two World Wars, it was bad for the world and bad for the Jewish people. And, when America was engaged and leading in the world, as we have been since the end of World War II, it was good for the world and good for the Jewish people.

New questions have arisen as to whether America will continue its historic leading role.

Allies and adversaries are both asking such questions. For the sake of the world, because in the absence of the U.S. there is no reliable leadership, and for the sake of the Jewish people, because there is no substitute for the kind of support we have seen from the U.S. for Israel, Soviet Jews, and the fight against anti-Semitism, let us hope that the year ahead will witness a renewal of American leadership and respect for this great country.

When we look to the year ahead, we have reason to hope that if we take a strong stand, advocate effectively, speak truth to power, and teach our children to respect one another, our communities can endure trying times and the fight against hate and intolerance will be won step by step.

The sound of the shofar is distinct, and its blast calls to us during the High Holidays. It is a reminder that as Jews and as human beings we are obligated to stand up for others as devotedly as we stand up for ourselves.

Marvin D. Nathan is national chairman of the Anti-Defamation League. Jonathan A. Greenblatt is ADL’s CEO and national director.