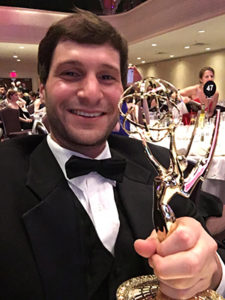 Sam Korotkin with his Emmy Award.

Sam Korotkin, a senior videographer with Buffalo’s Pegula Sports and Entertainment (PS&E), which is the parent company of the Buffalo Bills and the Buffalo Sabres, was one of a team of winners in the category of “Sports: Interview/Discussion.”

Korotkin is an honors graduate of the University of Missouri School of Journalism and Buffalo’s Nichols School. After college he worked in Memphis for WMC-TV, the NBC affiliate, as a sports reporter, producer and anchor prior to his employment with PS&E.

Bruce Korotkin received the Albany Jewish Federation Young Men’s Leadership Award in 1984, but then moved to Buffalo for his job in 1985. Sam grew up in Amherst, a suburb of Buffalo.

Israel gave Trump the royal treatment he wants in U.S.
Are you a teen? Are you into sports? The local Maccabi Games want you!