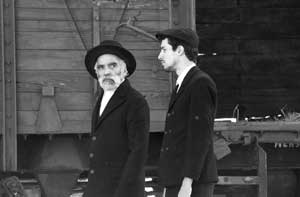 Hermann Sámuel (Iván Angelus) and his son (Marcell Nagy) arrive via train to a small village in Hungary that is full of secrets in the film “1945.” A discussion of the film is planned.

SARATOGA SPRINGS­– Saratoga Jewish Community Arts (SJCA) and Temple Sinai, will sponsor a Zoom panel discussion of the award-winning film “1945” by Hungarian director Ferenc Turok based on the story that was co-written with Gabot T. Szanto. The discussion is slated for Tuesday, Sept. 22, at 7 p.m.

The film takes place in a small village over several hours on a single hot August afternoon, just a few months past V-E Day; atomic bombs have already dropped on Japan, the Russians have “liberated” Western Europe, and the Nazis have retreated. All the local Jews had been deported from the town a year earlier, most of them have died, and the remaining townspeople had taken all the Jews’ belongings and property. Two serious, unsmiling Jews arrive by train and walk through the village, creating a major disturbance by their very presence. “Why are they back?” is on most villagers’ minds. The whole town devolves into panicked chaos. It is a tinderbox of tension: Have they returned to take back what is theirs? Should the villagers give back what was taken? Should they keep what has become theirs?

“This is a moody film, not subtle,” says SJCA Coordinator Phyllis Wang, “but extremely riveting for a mature audience, about the penetrating paranoia of post WWII, and the anti-Semitism that pervaded Europe.”

Pre-registration for the discussion is required at

After registration individuals will receive confirmation e-mail containing information about joining the meeting.