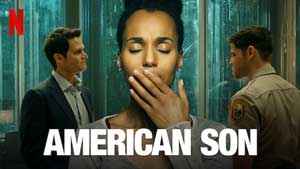 SARATOGA SPRINGS, – Saratoga Jewish Community Arts (SJCA), with Temple Sinai and the Jewish Federation of Northeastern NY, will present an online panel discussion on “American Son,” an adaptation of a Broadway play of the same name, Sunday, Aug.16, at 7 p.m.

Written by Christopher Demos-Brown and directed by Kenny Leon, while not based on one specific real-life story, “American Son” explores the truth of real issues that exist among law enforcement.

Kendra Ellis-Connor and her husband, Scott Connor, learn that their biracial 18 year old son, Jamal, a student about to enter West Point, was not actually arrested, but was shot by a black police officer who had pulled over the teen and his friends after the officer had witnessed the driver — not Jamal — buying drugs. The boys exited the car without the officer’s instructions to do so, and he fired.

The film received negative reviews, citing its social commentary on the subject of race as too heavy-handed.

“This film forces us to ask questions, examine societal norms, and dig deeper into stereotypes,” says SJCA Coordinator Phyllis Wang. “During the course of this film, there are times viewers are able to see themselves and their perspective, and have a moment when they say, ‘Wow, I didn’t know that I was doing that.’”

“American Son,” may be screened Netflix or another outlet.

Registration for the discussion is: Zoom meeting