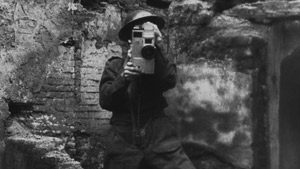 One of the Allied photographers  is shown recording for posterity images of Holocaust survivors as seen in the HBO documentary “Night will Fall.”

SARATOGA SPRINGS–Saratoga Jewish Community Arts will present the film “Night Will Fall” in commemoration of Yom HaShoah (Holocaust Remembrance) Day on Thursday, May 2, at 7 p.m. at Temple Sinai, 509 Broadway, Saratoga Springs. A reception and panel discussion will follow.

In 1945, the British army commissioned film units for a documentary on the liberation of Nazi concentration camps that would be directed by Alfred Hitchcock. This new HBO film explores the making of that film,  “German Concentration Camps: Factual Survey.”
In 1945, Sidney Bernstein, the chief of the Psychological Warfare Film Section of the Supreme Headquarters Allied Expeditionary Force, was directed to create the definitive documentary chronicling the liberation of the Nazi concentration camps. Bernstein’s aim was, in his words, to “prove one day that this had actually happened,” and have it serve as “a lesson to all mankind as well as to the Germans.”
He secured his pal, Alfred Hitchcock, to serve as the film’s supervising director. But the horrifying and shocking footage of numerous barbaric concentration camps, shot by British, American, and Russian World War II soldiers as the camps were being liberated, became tangled up in a complicated web of politics.

“Night Will Fall” was produced by Brett Ratner and directed by Andre Singer, who served as president of The Royal Anthropological Institute of Great Britain. The documentary opens with footage from “German Concentration Camps: Factual Survey “of the British 11th Armoured Division. The British soldiers found tens of thousands of emaciated prisoners inside the camp, many on the brink of starvation.
Hitchcock served as a “director’s advisor,” supervising the way the footage was edited. He demanded that the documentary emphasized long shots and frequent pans, so that people wouldn’t question its authenticity. Hitchcock was also disturbed by the stark contrast between the lives of Germans living near the camps and the ghastly nightmare within, and requested that the film use maps to highlight their proximity, driving home the message that these German citizens knew what was going on.
Bernstein’s footage was eventually used as evidence against Nazi officials during the Nuremberg trials. Singer claims that the British government chose to kill the comprehensive documentary because they didn’t want to alienate the German people who were in a rebuilding phase and with hints of the Cold War starting  were seen as a potential ally against the Soviets. The British were also worried about the budding Zionist movement and weren’t interested in galvanizing support for a Jewish state at a time when British forces occupied Palestine.

A $5 admission/ donation is requested. Information and reservations may be obtained at 518-584-8730, opt. 2. www.saratogajewishculturalfestival.org.