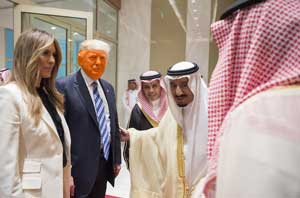 By MARCY OSTER
NEW YORK CITY (JTA) – The king of Saudi Arabia has thrown cold water on the assurances of Jared Kushner, the son-in-law of Donald Trump who is leading Middle East policy, that all Arab countries will follow the United Arab Emirates’ lead and normalize ties with Israel.

Saudi Arabian King Salman bin Abdulaziz said his country would not pursue normalization with Israel until there is peace between Israel and the Palestinians.

The king told Trump in a phone call Sunday that his kingdom appreciates efforts made by the United States to bring about peace but that Saudi Arabia would like to see a peace treaty based on the Arab Peace Initiative, which was proposed by Saudi Arabia in 2002, the state-run Saudi Press Agency reported.

The conversation comes on the heels of the U.S.-brokered normalization agreement between Israel and the United Arab Emirates, and Trump’s announcement Friday that Israel and the Muslim-majority Kosovo would establish diplomatic relations.

Saudi Arabia opened up its air space to allow an airplane carrying Israeli and U.S. diplomats to fly through its airspace, offering some hope that it might be open to changing its relationship with Israel. The kingdom later announced that it would allow any airplane from any country arriving or departing from the UAE to use its airspace.