Scientist who fled Nazis among Nobel Prize in Physics winners 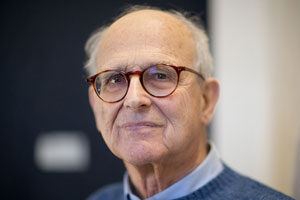 NEW YORK CITY (JTA) – Three American scientists were awarded the Nobel Prize in Physics, including one who fled the Nazis with his parents and another whose grandparents were Polish immigrants.

Weiss won half of the $1.1 million prize, with Barish and Thorne sharing the other half.

The Nobel winners and the late Ron Dreyer, also of Caltech, founded the international collaboration of physicists and astronomers known as LIGO, the Laser Interferometer Gravitational-Wave Observatory. In February 2016, they announced that they had recorded gravitational waves emanating from the collision of a pair of black holes a billion light years away.

Drever died this year; the Nobel Prize is not awarded posthumously.

Weiss, 85, was born in Berlin to a non-Jewish mother and a Jewish father. The family fled Berlin for Prague when Weiss was a baby because his father was Jewish and a member of the Communist Party. After the Munich agreement in 1938, the family left Prague for the United States. Weiss earned his doctorate from MIT and in 1964 joined its faculty.

Barish, 81, was born in Omaha, Nebraska, and grew up in Los Angeles, the son of Lee and Harold Barish, the children of Polish immigrants to the United States. He earned his doctorate in 1962 from the University of California, Berkeley, and joined Caltech in 1963.

Thorne, 77, received his doctorate from Princeton University in 1965 and joined Caltech in 1967.