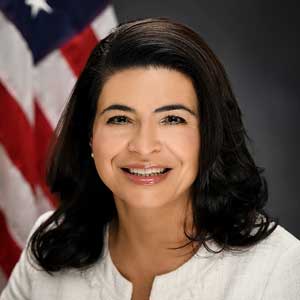 ALBANY–State Senator Anna Kaplan, the first political refugee and first Iranian-American elected to the New York Senate, will discuss her work as a senator in a talk at B’nai Sholom Reform Congregation on Monday, June 3, 7 p.m. at the synagogue, 420 Whitehall Rd., Albany. The program is free and open to the public.

Kaplan represents the 7th Senate District on Long Island.  She first ran for the Senate in 2018, calling for passage of the Reproductive Health Act, gun safety legislation and increased economic development in Nassau County.

Kaplan was born Anna Monahemi in Tabriz, Iran, to a Jewish family. When the Islamic Revolution swept the country, her parents sent her to the United States on her own for safety.  She arrived in Crown Heights, Brooklyn, as part of an international effort to save Iran’s Jews and was sent to live with a foster family in Chicago, where she learned to speak English and completed high school. Eventually, she was granted political asylum. After her family was reunited, the family moved to Queens, where Kaplan graduated from Yeshiva University Stern College for Women and then Benjamin N. Cardozo School of Law.

Later after settling with her husband  and two daughters in Great Neck, Nassau County, Kaplan reports that she felt a strong desire to give back to the country that had opened its arms to her as a child in need. In 2011, she was elected to the town of North Hempstead Council. Additional political service followed.

The B’nai Sholom office: office@bnaisholom.albany.ny.us or 518-482-5283 can provide information.