Sen. Schumer is wrong about settlements

Senate Democratic Leader Chuck Schumer told AIPAC’s 18,000 delegates that Israeli settlements are not obstacles to peace. He is wrong. They are and that’s what they were intended to be.

My source is the man known as the patron of the settler movement, Ariel Sharon. I first met him in 1980 when he was Prime Minister Menachem Begin’s agriculture minister. He rolled a map across the table where the two of us sat and showed me his plan to build a network of settlements scattered about the West Bank. “There’s no way you can draw any lines” for a Palestinian state, he explained to me.  He signed the map for me and it now hangs in my office.

Schumer said “Israel voluntarily” left Gaza in 2005, and “three weeks later” Palestinians in the coastal strip “threw rockets into Sderot.” For the Brooklyn senator that was proof that the settlements are not the “blockage to peace.”

“Major Screw-up”
Wrong again, Schumer. That’s intentionally faulty and pandering logic. By that time Sharon had become prime minister and had endorsed the creation of a future Palestinian state. In August 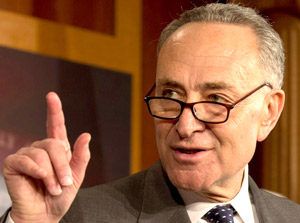 of that year nearly 9,500 Jewish settlers were expelled by his government from 21 settlements in Gaza and four in the northern West Bank.

The Gaza disengagement was a major screw-up on both sides. Israel failed to make living arrangements for the displaced settlers, and many spent years in temporary homes. Sharon failed— actually refused — to negotiate an order transfer arrangement with the PLO on security, property and commerce.  It was simply a matter of walking out the door and tossing the keys back over his shoulder.

The PLO, for its part, blew an opportunity to show the world it was ready for statehood by turning Gaza into a showcase for self-rule and democracy. Instead it was more of the usual corrupt and brutal rule, which led to a bloody takeover by Hamas, which turned the area in a terror base and launching pad for rockets and missiles targeting Israeli towns.

Meanwhile, settlement construction and expansion continued to grow on the shrinking West Bank territory where Palestinians wanted to build a state. Land is continually being gobbled up for new homes and roads, most for exclusive Jewish use, linking Jewish settlements and Israel and creating the infrastructure for a potential apartheid state.

Fallacious Arguments
The argument that settlements are essential to Israeli security like Yad Mordechai in 1948 is ancient history. Today many are bedroom communities and suburbs around bigger cities inside the Green Line, the 1967 border.

Most American Jews don’t share Schumer’s enthusiasm for settlements or his blindness to their impact, but then again, they aren’t seeking pro-Israel campaign money.

He told the delegates that the reason there is no peace is “too many Palestinians and too many Arabs don’t want any Jewish state in the Middle East.

He gives the Arabs too much credit. There are also too many Israelis who don’t want a Palestinian state, starting with the current Israeli government and its leaders.

Notwithstanding comments made under pressure from the Obama administration, Prime Minister Benjamin Netanyahu was never serious about the two state solution. He devoted disproportionately more energy to preventing it than promoting it, and in fact promised voters in his last election that there would be no Palestinian state on his watch.

Within his government is a movement to extend Israeli civil law to West Bank settlements, which has been called “creeping annexation.”

Israel may be nearing the end of the Netanyahu era as the long-serving prime minister faces criminal corruption investigations and possible indictments.

Potential successors are already circling, and prominent among them is Education Minister Naftali Bennett, head of the religious/nationalist Jewish Home Party. An outspoken advocate of aggressive settlement construction and annexation, he told the recent AIPAC conference, “ A Palestinian state is off the table — it’s done.”

A majority of American and Israeli Jews oppose annexation.

Future of Settlers?
An estimated 400,000 Jewish settlers live in East Jerusalem and the West Bank. The major settlement blocs close to the Green Line are expected to become part of Israel in an eventual peace agreement, leaving the open the fate of hundreds of thousands of Jews under possible Palestinian rule. Few are likely to want or be able— or permitted—to stay, raising the gargantuan dilemma of their repatriation.

That in itself is another obstacle to peace. While leaders on both sides dither and delay, the settlement enterprise continues absorbing land and creating infrastructure that can make a contiguous Palestinian state unviable.

There was a time when settlements could have been seen by Palestinians as an incentive to make a deal, when the Jewish population of the West Bank was small, more concentrated and less entrenched. Instead the Palestinians stuck to maximalist demands and opportunity slipped by. That seems like a long time ago in a galaxy far, far away.

Other Obstacles Too
Today settlements are a major obstacle, as intended. Their most ardent supporters, like Bennett and the national-religious camp, see their expansion as critical to preventing a Palestinian state. But they are not the only problem.

Israelis are right to point to Palestinian terrorism and incitement as obstacles to peace, and an unwillingness to accept Israel as the nation state of the Jewish people.

Another is the failure of Arab leaders to prepare their public opinion and give the Palestinians the encouragement and support they need to make historic and difficult decisions.

But Palestinians ask— not without justification—how they can make peace when Israel is taking up more and more of the land they need for a viable state.

Schumer may not believe settlements are a “blockage” to peace, but the evidence suggests otherwise.  And Schumer, a smart man, undoubtedly knows that.