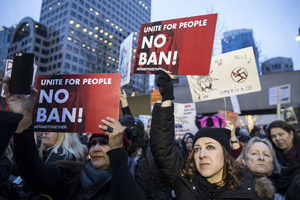 NEW YORK CITY (JTA) – At least six Jewish civil rights organizations are urging the Supreme Court to block President Donald Trump’s most recent ban on travel from a number of predominately Muslim countries. The groups filed a joint amicus brief with the court asking it to uphold lower court rulings that have blocked the “Muslim ban.”

The brief, spearheaded by the Anti-Defamation League, was filed Friday, March 30, It was joined by the Jewish Council for Public Affairs, an umbrella body for Jewish public policy groups; three Reform movement groups, the Union for Reform Judaism, the Central Conference of American Rabbis and Women of Reform Judaism; and T’ruah, a rabbinical human rights group.

“Virtually every court that has reviewed iterations of the president’s travel ban has found it be discriminatory and ill-advised,” John Harris, the ADL’s Legal Affairs Committee chairman and primary author of the brief, said in a statement. “The Supreme Court has the opportunity to ensure that our nation stands as a beacon of hope for those seeking a better life, free from persecution and extreme violence, consistent with our Constitution and our core values.”

The executive order announced in September prohibits travel from Iran, Libya, Somalia, Syria and Yemen, as well as from Chad and North Korea, and includes some Venezuelan government officials and their families. The ban went into effect in December, even as the appeals moved forward.

It was the Trump administration’s third attempt to prevent the entry into the United States of travelers from those countries. U.S. courts struck down the earlier bids by Trump to impose a ban on travel from a number of Muslim-majority countries, in part because Trump himself signaled that the ban was meant to target Muslims.

The American Jewish Committee also filed an amicus brief calling on the court to affirm the lower court’s ruling. The ban, according to the AJC brief, “cannot withstand even minimal judicial scrutiny because it conflicts with the [Immigration and Nationality Act’s] prohibition on nationality-based discrimination in the issuance of immigrant visas.”

In February, the U.S. Court of Appeals for the 4th Circuit in Virginia declared Trump’s travel ban unconstitutional. The decision came a month after the Supreme Court agreed to hear an appeal from a similar decision from the 9th Circuit Court of Appeals in San Francisco.

Attorneys general for 16 states and Washington, D.C., also filed an amicus brief Friday with the Supreme Court against the travel ban.

The Supreme Court will hear oral arguments on the ban at the end of April.