‘Shalom Italia,’  a study in Holocaust recollection to be shown on WMHT 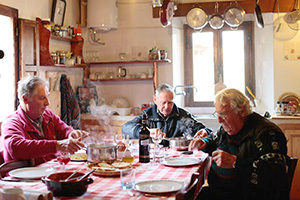 In a scene from “Shalom Italia,” the brothers share a meal.

On the run from Nazis, three Italian Jewish brothers spent months during their childhood hiding in a cave in the Tuscan countryside. Nearly 70 years later, after emigrating to Israel, the three reunite in the country they were forced to abandon and rediscover their hiding place. “For years I’ve wanted to find that cave, the place to which we owe our lives,” says Bubi, the youngest of the trio.

Amid hearty Tuscan meals and sweeping landscapes, the octogenarians’ quest unexpectedly swells with humor and clashing memories in “Shalom Italia.”  Directed by Tamar Tal Anati, the film has its national broadcast premiere on Monday, July 24, at 10 p.m. (check local listings) on the PBS documentary series POV (Point of View). POV is American television’s longest-running independent documentary series, now in its 30th season. The feature film will follow the Oscar-nominated short “Joe’s Violin,” in which a donated musical instrument forges an improbable friendship between a 91-year-old Holocaust survivor and a 12-year-old Bronx school girl.

Identity Questions
Retracing their steps, the brothers in “Shalom Italia’ are as different as can be. Emmanuel, the oldest and a world-renowned anthropologist and archaeologist based in Israel, simply recalls misery and only agrees to the journey to make Bubi happy. “Why search for it? I don’t want to remember,” he says. Meanwhile, Andrea, an athletic physicist just two years younger than Emmanuel, remembers an enchanted childhood: “Those were wonderful times. We lived in the woods, played Robin Hood and collected mushrooms. I had fun during the Holocaust.” However, Bubi, 4 1/2 at the time, barely remembers the cave. “I don’t know whether family stories and my memories overlapped. It’s all a bit vague.”
“It’s human for our memories—personal or shared—to become a source of our identity,” said filmmaker Tamar Tal Anati. “Whether that memory comes from one ‘truth’ is explored by Bubi, Emmanuel and Andrea. Often it seems any particular moment can only be accurately constructed when everyone is involved, as each person’s particular recollection of an event helps piece together a larger mosaic of a shared experience.”
Unalike as they are, Bubi, Andrea and Emmanuel are undoubtedly brothers. They bicker over driving directions, recipes and how exactly their time in the cave should be remembered. Probing the boundaries between history and myth, the brothers soon learn their memories are not so easily unraveled. They can’t agree whether the family hid valuables with a village neighbor, or whether the bow and arrows they played with in the woods were bought at a store or fashioned by hand. “History is full of doubts,” Emmanuel, says, to which Bubi impatiently replies, “You keep doubting and contradicting everything and saying it’s not true over and over again.”

Legacy  Of Memory
“More than 70 years after the Holocaust, the youngest survivors are advancing in age. Both “Joe’s Violin” and “Shalom Italia” raise compelling questions about how we will continue passing on that generation’s memories,” said POV executive producer Justine Nagan.
“Shalom Italia” and “Joe’s Violin” will stream online on pov.org in concurrence with their broadcast.
Tamar Tal Anati, director/producer/writer, is an award-winning filmmaker with more than 20 international awards. Her documentary “Life in Stills” won the Award of the Israeli Film Academy—Israel’s highest film award—for Best Documentary in 2012 and was named best film at the Docaviv International Documentary Film Festival in Tel Aviv. She was also named best new director at the Dok Leipzig international film festival in 2011.
POV is  an American television’s independent documentary series, now in its 30th season.