Shavou’ot (Pentecost) guide for the perplexed, 2020 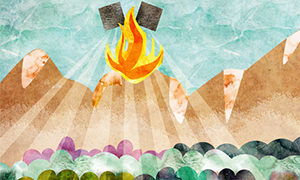 1. Impact on the formation of the US
The holiday of Shavou’ot (Pentecost) commemorates the legacy of Moses – the Exodus, the Ten Commandments and the Torah (the Five Books of Moses) -which had a significant impact on the key values and achievements of the Early Pilgrims and the Founding Fathers: the US Revolution, Federalist Papers, US Constitution, the Bill of Rights, etc.

2. The Liberty Bell
Shavou’ot is the holiday of liberty/Exodus, as highlighted by the Biblical concept of Jubilee – the cornerstone of Biblical liberty – which is inscribed on the Liberty Bell: “Proclaim liberty upon the earth and unto all the inhabitants thereof (Leviticus 25:10).” The Liberty Bell was installed in Philadelphia in 1752, 50 years following William Penn’s Charter of Privileges, inspiring the 50 States in the union. The Biblical Jubilee is commemorated every 50 years, releasing slaves and returning land property to the original proprietors. Shavou’ot is celebrated 50 days following Passover, and Pentecost – a derivative of the Greek word for 50 – is celebrated 50 days following Easter.  According to Judaism, there are 50 gates of wisdom, studied during the 50 days between Passover and Shavou’ot.

3. The Scroll of Ruth. Honor thy mother in-law…
Shavou’ot spotlights the Scroll of Ruth, the first of the five Biblical scrolls, which are studied during five Jewish holidays: Ruth (Shavou’ot), Song of Songs (Passover), Ecclesiastes (Sukkot/Tabernacles), Book of Lamentations (the Ninth day of Av), Esther (Purim). Ruth was a Moabite Princess, the great grandmother of King David, the son of Jesse and the grandson of Ovad, who was the son of Ruth.

Ruth was a role model of loyalty to her Jewish mother in-law (“Your people are my people and your G-d is my G-d”), humility, gratitude, responsibility, reliability, respect of the fellow human beings, faith and optimism. According to the Bible, Ruth, the daughter-in-law, was better than seven sons. Ruth stuck by her mother-in-law, Naomi, during Naomi’s roughest time, when the latter lost her husband, Elimelech (a President of the Tribe of Judah), two sons and property. Just like Job, Naomi bounced back from the lowest ebb of ordeal to fulfilled hope.  Job and Naomi went through family, economic and social calamities, lost their spouses, children and financial assets; both retained confidence in G-d and reconstructed their families; both became symbols of conviction over convenience, faith-driven patience and endurance.

The legacy of Ruth reflects the central role played by Biblical women, joining the Matriarchs Sarah, Rebecca, Leah and Rachel; Miriam, the older sister of Moses; Deborah the Prophetess, Judge and military leader; Hannah, the mother of Samuel the Prophet; Queen Esther, etc.

The geographic platform of the Scroll of Ruth was the Judean Desert in Judea and Samaria – the Cradle of Jewish history, religion and ethnicity.

4. The significance of Shavou’ot
Shavou’ot (שבועות) means “weeks” in Hebrew. It is celebrated seven weeks following the second day of Passover, and constitutes an historical, national, agricultural and spiritual extension of Passover. While Passover highlights the physical liberty from slavery, Shavou’ot highlights the spiritual liberty to embrace the values of the Ten Commandments and the Torah, in preparation for the liberation of the Land of Israel.

Shavou’ot commemorates the 40 years of tough challenges in the desert, which forged the Jewish state-of-mind: liberty is acquired through willingness to sustain tribulations (blood, sweat and tears); the steeper the hurdle, the more critical the mission, the deeper the gratification; adversities and challenges are opportunities in disguise.

The harvesting season starts with Passover and concludes with Shavou’ot, which is also named the Holiday of the Harvest (ביכורים). Shavou’ot is one of the three Jewish liberty-oriented pilgrimages to Jerusalem (Passover, Shavou’ot and Tabernacles).

5. The centrality of humility
Shavou’ot highlights humility as a most critical value of human behavior and leadership. It is underlined by the receipt of the Torah, the Ten Commandments and the 613 statutes in the desert – an uncomfortable environment – on Mount Sinai, which is not an overpowering mountain.  Moses, the exceptional law-giver and leader, was accorded only one compliment in the entire Bible: “the humblest of all human beings.”

6. The Ethics of the Fathers(Pirkey Avot in Hebrew)
It is customary to study – from Passover through Shavou’ot/Pentecost – the six brief chapters of The Ethics of the Fathers, one of the 63 tractates of the Mishnah (the Oral Torah) – a compilation of common sense principles, ethical and moral teachings, which underline key inter-personal relationships. For example:

“Who is respected? He who respects other persons!”
“Who is a wise person? He who learns from all other persons!”
“Who is wealthy? He who is satisfied with his own share!”
“Who is a hero? He who controls his urge!”
“Talk sparsely and walk plenty;”
“If I am not for myself, who will be for me? If I am only for myself, what am I? If not now, when?”
“Don’t be consumed with the flask, but with its content.”
“Conditional love is tenuous; unconditional love is eternal.”
“Treat every person politely.”
“Jealousy, lust and the obsession with fame warp one’s mind.”

7. Shavou’ot and the significance of 7
Shavou’ot reflects the centrality of 7 in Judaism. The Hebrew root of Shavou’ot (שבועות) is Seven (שבע – Sheva), which is also the root of “vow” (שבועה – Shvoua’), “satiation” (שובע – Sova) and “week” (שבוע – Shavoua’).  Shavou’ot is celebrated 7 weeks following Passover. The Sabbath was the 7th day of the Creation in a 7-day-week, and according to Genesis, there are 7 beneficiaries of the Sabbath. The first Hebrew verse of Genesis consists of 7 words. God created 7 universes – the 7th universe hosts the pure souls, hence “the Seventh Heaven.” There were 7 monumental Jewish leaders – Abraham, Isaac, Jacob, Moses, Aaron, Joseph and David, representing 7 key human qualities. There were 7 Jewish Prophetesses – Sarah, Miriam, Devorah, Chana, Abigail, Hulda and Esther. There are 7 major Jewish holidays – Rosh Hashanah, Yom Kippur, Tabernacles, Chanukah, Purim, Passover and Shavou’ot. There was a 7-day-recess between the Ten Plagues of Egypt. The ancient Jewish Temple had a 7-branch-Menorah (lamp). There are 7 species of the Land of Israel – barley, wheat, grape, fig, pomegranate, olive and date/honey. The Jubilee follows a 7 seven-year-cycle.