Shavuot, celebrating the giving of the law—and the mother-in-law? 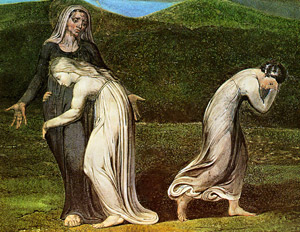 Naomi entreating Ruth and Oprah (her daughter in laws) to return to Moab in the Book Of Ruth as depicted by William Blake in 1795.

By EDMON J. RODMAN
LOS ANGELES (JTA) – In the Ten Commandments, the Torah tells us to “Honor your father and your mother,” but on mothers-in-law, it’s mum. That is until we come to the two-day holiday of Shavuot and read the Book of Ruth, which records the relationship between Ruth and her mother-in-law Naomi.

Since Shavuot celebrates the giving of the Torah, and in Ruth we can observe another form of giving —that of loving familial support—we can use the holiday to explore the give-and-take of the mother-in-law/daughter-in-law relationship. It’s a relationship often marked in our times by tension, hackneyed jokes and even cartoon strips such as Mell Lazarus’ “Momma.” Sons-in-law, of which I am one, don’t feel left out, as there is much for them to take away, too.

In-law Issues?
An in-law bond is knit when Ruth (whose husband has just died) says to Naomi, who has just tried to convince her to return to her homeland, “Do not urge me to leave you, to turn back and not follow you. For wherever you lodge, I will lodge, your people shall be my people, and your God my God.”

Though beautiful in sentiment, for some—myself included—it also seems like a size-too-small sweater, leaving little room for movement.

“What about the freedom to live the life my spouse and I want?” I can remember thinking soon after tying the knot 32 years ago. “What does my mother-in-law have to do with that?” I foolishly thought.

Apparently it’s a question many of us have failed to examine carefully, as websites are filled with tales of  mother-in-law woe about intrusive and too frequent visits, and unasked-for advice, especially about child rearing.

“She comes over four to five times a day which started right after we got married,” begins a letter in an advice column tagged “Mother-in-Law from Hell” on the Aish.com from a woman who has been married for eight years. Another letter in the “Dear Rachel” column on Chabad.org begins, “My mother-in-law is constantly criticizing me and my ability to parent.”

Diplomacy Is Key
Marilyn Kagan, a Los Angeles therapist with over 30 years of experience counseling individuals and couples, as well as teaching a groundbreaking course at the American Jewish University here called “Marriage for Life” (formerly “Making Marriage Work”) has seen her share of tumultuous relationships whose discord is rooted in in-law issues.

“How can you be more compassionate?” is a question Kagan counsels wives to ask when they are having differences with their mothers-in-law. “Put yourself in your mother-in-law’s shoes,” she advises, “she’s losing the definition of what she’s been doing much of her adult life.” Kagan says she also wants the daughter-in-law to realize that she’s the one who “sets the home life and that has to be respected.”

When problems begin to build, Kagan says, “sometimes you need to say, ‘Mom, let’s get together and talk.’ ” For a script she suggests beginning with something like, “I know you love your son and I am grateful for this human being, and I know that you and I want the best for our family,” before speaking about a specific problem.

Present A United Front
As for the husband, who is often caught between his wife and mother, Kagan suggests that “men need to take a deep breath. They can’t withdraw like a turtle.”

For a husband to choose between a wife and a mother “makes them feel like bad boy,” says Kagan, who hosted a Los Angeles radio call-in counseling show and a television show on the Disney affiliate here in the 1990s. Instead, she says, “a husband needs to be a big boy.”

“I got into the middle of things when my mother was critical of how we were raising our kids,” I respond, suddenly feeling defensive about my mother, who of course was perfect.

Jewish men who are first generation in the United States can “get stuck in both worlds,” Kagen says. In such cases, she suggests a team approach: The husband must go to his wife “for guidance” on how to approach the mother-in-law.

“Be a united front,” says Kagan, who with therapist Neil Einbund wrote the book Defenders of the Heart.

Too many visits to the in-laws? For those who go to the mother-in-law’s every week, she wonders, “Why not set up your own rituals and invite her over?”

As to conflicts over in-laws giving stuff to your kids on your do-not-serve list, Kagan observes, “If grandma is going to give their grandchild some ice cream, it’s not going to kill them. Yours is the house in which the fire burns, why the power struggle?”

And as if asking us all to be a little more Ruth-like in our responses to what might seem like potential mother-in-law conflict, Kagan counsels first thinking, “Let’s see if we can find a way to make this work.”

Edmon J. Rodman is a  columnist who writes on Jewish life from Los Angeles.