SJCC Film Festival to present ‘Apples from the Desert;’ Amy Posner to discuss 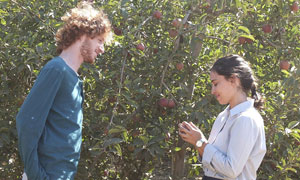 Dubi (Elisha Banai) and Rivka (Moran Rosenblatt) talk next to an apple tree in the film “Apples from the Desert, ” the first film in the Schenectady Jewish Community Center’s virtual Jewish  film festival.  It is slated for Sept. 13.

SCHENECTADY – The Schenectady Jewish Community Center will present the film “Apples from the Desert” to kick off its Virtual Fall Film Festival. The film will be made available online as will a discussion with Amy Posner. The discussion will be held virtually on Sunday, Sept. 13 at 7:30 p.m. The film will be available from Friday, Sept. 11, up until the time of the discussion through a link that may be accessed after registering.

This film, based on an award-winning Israeli play, explores conflicts that arise in a Jewish Orthodox family when traditional values are challenged by modern perspectives. Rivka, an only child living with her strictly religious parents in Jerusalem, breaks tradition attending dance classes where she forms a relationship with a secular kibbutznik. Her father notices her continuous acts of rebellion and begins to arrange her marriage to an older widower with children of his own. When Rivka runs away, her family is forced to discover and re-establish relationships within the family.

Posner has served as executive director of Hillel at the College of Staten Island since 2008. She has been building communities through youth-serving organizations for more than 25 years, having held positions in Young Judaea and the Girl Scout Council of Central NY. Posner also directed the Jewish Multiracial Network, a grass-roots organization serving multi-racial Jewish families and working to raise awareness of the diversity of the Jewish people. She served as director of Camp Edward Isaacs and was recognized as the 2014 JCC of Staten Island “Dor L’Dor” Woman Leader of the Community. She has a bachelor’s degree in recreation from the University of Maryland and a master’s degree in Jewish education from the Davidson School of the Jewish Theological Seminary of America.

Featured films of the Schenectady JCC incorporate Jewish themes. Cost of the film is $11 for individual nonmembers and $6 for individual members or $22 for nonmember households and $11 for member households. Registration information for the film and discussionmay be obtained at  http://www.schenectadyjcc.org/events/jewish-film-festival/ or by contacting  Jewish Cultural & Adult Programming Director, Judy Ben-Ami at judyb@schenectadyjcc.org.