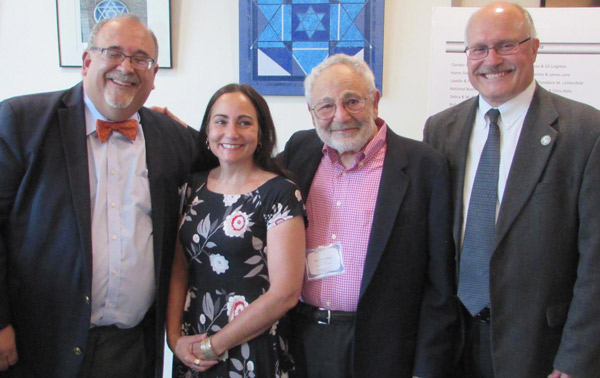 SCHENECTADY–The Schenectady Jewish Community Center (SJCC) will host the annual Robert J. Ludwig Community Service Awards Gala on Saturday, Dec. 2, at 7 p.m. It will be held, for the first time, at the Robert and Dorothy Ludwig SJCC on the Golub Family Campus, 2565 Balltown Rd. The program will feature cocktails, kosher food stations, the awards presentation, and entertainment.

For the past six years, Schenectady JCC has recognized individuals, organizations and businesses for their service in the Schenectady community at the gala, according to organizers.

The late Ludwig was an educator, a volunteer, and gave his time and his talents to the Center. He served as program director for the SJCC early in his career and then later, returned to serve on the board of directors.  “Community service was a life-long commitment to Bob…to better his self, to better the people around him, and to better his community,” said Mark Weintraub, SJCC executive director.

According to organizers, the 2017 Robert J. Ludwig Community Service Award honorees are:

Sharon Cutler, Community Service Award
Cutler has served as a member of the leadership team at the Center, officially and unofficially, for many years. She served as chairwoman of the Early Childhood Education department while her children (now adults) were enrolled, and then became active on the board of directors Eventually  she served as president of the board. Cutler continues to be involved as a volunteer on several Center committees and as an active member in various SJCC programs.

M&T Bank, Corporate Partnership Award
M&T Bank is a regional financial services company with more than $120 billion in assets. Through its investment in SJCC and in programs, such as Leadership Tech Valley, the bank sets an example of good corporate citizenship. The Center has benefited from financial counsel over as a client of M&T Bank, and has benefited from the M&T Bank Charitable Foundation, which contributes millions of dollars to a wide-range of community-based organizations.

Information and ticket reservations may be obtained by contacting Andy Katz at 518-377-8803 or andrewk@schenectadyjcc.org.