SJCC to present ‘Shoelaces’ with a discussion led by The Alternative Living Group, Inc. 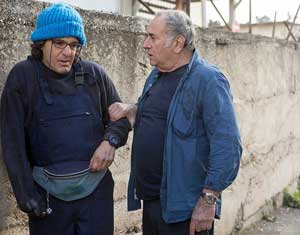 Doval’e Glickman as Reuben, right, grabs Nevo Kimchi playing Gadi, left, in the film “Shoelaces.” The movie will be screened at the SJCC on Feb. 15 and 16.

SCHENECTADY – The Schenectady Jewish Community Center (SJCC) will present the film “Shoelaces” to note Jewish Disability Awareness Month and as part of its annual Jewish Film Festival on Saturday, Feb. 15, at 7:30 p.m. and Sunday, Feb. 16, at 2 p.m. at the Schenectady Center. Following the first presentation of the film on Saturday, people from The Alternative Living Group, Inc. will lead a discussion.

In this film, Reuben (Doval’e Glickman), an aging father, is in need of a kidney transplant and his special-needs son Gadi (Nevo Kimchi) wants to donate one of his own kidneys to help save his father’s life. As Gadi’s sole legal guardian, the transplant committee objects to the procedure claiming Reuben, the father, does not have the right to authorize such an invasive procedure.

Gadi, having just reunited with his father after he left him as a young boy and having recently lost his mother, fears he will be alone if he doesn’t do something to help his father. Furious with the committee’s decision, Gadi sets out to fight for this right to save his father’s life.

The Alternative Living Group, Inc. provides residential, recreational and support services to create environments where persons with developmental disabilities can be safe, happy and can develop the ability to live as independently as possible, according to organizers of the film.

Tickets for films featured in the festival are $10 for non-JCC members and $5 for JCC members. Kosher refreshments are included in the price. Information on this film or the entire Jewish Film Festival may be obtained at http://www.scenectadyjcc.org/arts/jewish-film-festival.