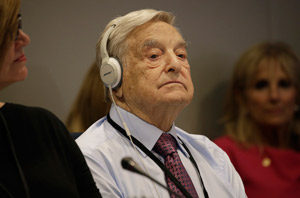 (JTA) — An explosive device was found in the mailbox outside of the New York home of Jewish billionaire George Soros.The device found Monday, Oct. 22, was detonated by a police bomb squad, The New York Times reported.

The home is located in Katonah, a hamlet in the upscale town of Bedford in northern Westchester County.

A package containing the bomb was opened by an employee in the Soros home, who then called police. Soros was not at the home when the bomb was discovered, according to The Times.

Recent Accusations
The case has been turned over to the FBI. Police said there is no threat to public safety.

Soros has come under intense fire recently from Republicans and the right in the United States. Sen. Chuck Grassley, R-Iowa, and President Donald Trump claimed that Soros funded the protesters at the recent demonstrations in Washington, D.C., over the Supreme Court nominee Brett Kavanaugh, and Trump’s lawyer Rudy Giuliani retweeted a Twitter user who called Soros the “anti-Christ.”

Rep. Matt Gaetz, R-Fla., charged recently, without evidence, that U.S.-bound migrants in a caravan formed in Honduras were offered cash by Soros. The Open Society Foundations, Soros’ philanthropy, has denied any involvement.

Soros, a Hungary-born Holocaust survivor, is a left-leaning donor to the Democrats and other liberal and pro-democracy causes in the United States, Europe and Israel. He is often featured in right-wing conspiracy theories, especially in his native Hungary, where nationalist Prime Minister Viktor Orban has pegged him as a symbol of intruding globalist forces.

Earlier this month, the Anti-Defamation League posted a report outlining the anti-Semitism behind many of the conspiracy theories surrounding Soros.

“Many of those conspiracy theories employ longstanding anti-Semitic myths, particularly the notion that rich and powerful Jews work behind the scenes, plotting to control countries and manipulate global events,” according to the report. “This is especially true when Soros-related conspiracy theories include other well-worn anti-Semitic tropes such as control of the media or banks; references to undermining societies or destabilizing countries; or language that hearkens back to the medieval blood libels and the characterization of Jews as evil, demonic, or agents of the antichrist.”