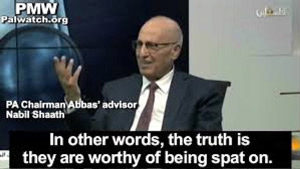 By ITAMAR MARCUS and NAN JACQUES ZILBERDIK
(Palestinian Media Watch via JNS) – Following Australia’s decision to suspend direct funding to the Palestinian Authority because it pays salaries to terrorists and their families, senior P.A. official Nabil Shaath, who is also an adviser to P.A. leader Mahmoud Abbas,

launched a verbal attack on Australia:

“This filthy talk of “the criminals” in connection with our Martyrs and prisoners, while they are our heroes, the heroes of self-sacrifice and the candles of freedom. They cannot be compared to the Israeli criminals in Israel’s prisons. …

Australia’s decision [to stop] transferring $10 million angered me greatly. … It transferred [the aid to the United Nations] … so that it would not serve for payment of the salaries of the [prisoners and Martyrs’] families.

In other words, the truth is they are worthy of being spat on.

You [Australians] are the servants of the U.S. .. I don’t want your 10 million; I don’t want to chase after them.”

Shaath’s definition of Palestinian terrorist prisoners as “heroes” and “candles of freedom” exemplifies the P.A.’s policy of honoring terrorists and murderers, as documented by Palestinian Media Watch. Shaath’s comments are also a result of Israel’s passing of the law to deduct terror salaries from P.A. tax money.

The law was passed by the Israeli Parliament on July 2, 2018 and deducts the amount of money the P.A. pays imprisoned terrorists and families of “martyrs” from the tax money Israel collects for the P.A. The law freezes the deducted money and has Israel hold it indefinitely. Should the P.A. not pay terrorists’ salaries or allowances to families of “martyrs” for a full year, the Israeli government would have the option of giving all or part of the frozen money to the P.A.

Australia announced on July 2, 2018, that it is ceasing its direct aid to the P.A. and will transfer aid through the United Nations. Australian Foreign Minister Julie Bishop explained that Australia unsuccessfully sought confirmation from the P.A. that the aid was not going to pay terrorists. Bishop added: “Any assistance provided by the PLO to those convicted of politically motivated violence is an affront to Australian values and undermines the prospect of meaningful peace between Israel and the Palestinians.”

PMW has led the exposure of the salaries paid by the P. A. to terrorists and their families.