Stephen Bannon: ‘I’m proud to be a Christian Zionist’ 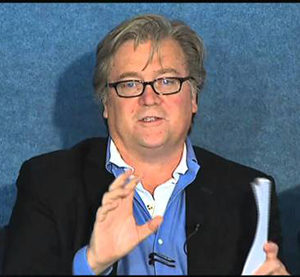 He also praised Republican Jewish megadonor Sheldon Adelson for his help in guiding Trump through a sexual assault scandal.

Trump Supporters En Masse
Bannon, at what may have been his first speech at a Jewish event since becoming associated with Trump last year, received a standing ovation and loud applause throughout his speech on Sunday, Nov. 12, in New York City. He was one of many current and former Trump administration officials to attend the event, including Ambassador to Israel David Friedman, who also spoke, former press secretary Sean Spicer and Sebastian Gorka, a former adviser to Trump who has ties to the Hungarian far right.

The ZOA, which takes hawkish positions on Israel, has been outspoken in its support of Trump, as compared to other large Jewish organizations. Its lineup of speakers Sunday included several Republicans, including Arkansas Sen. Tom Cotton, and a couple of centrist Democrats: legal scholar Alan Dershowitz and former Sen. Joe Lieberman of Connecticut.

Bannon shepherded the final months of Trump’s presidential campaign and served as one of his chief advisers until August. He supports what he calls “economic nationalist” policies, including limits on immigration and wariness of international agreements. He is the chairman of Breitbart News, a hardline right-wing publication.

Praise For Sheldon Adelson
Speaking to the ZOA, Bannon said Trump’s election victory “would not have come without one other person besides Donald Trump—Sheldon Adelson.”

In particular, he said Adelson’s advice helped Trump overcome the release of the “Access Hollywood” tape in which Trump boasted about sexually assaulting a woman.

Liberal Jewish groups protested Bannon’s appointment to the Trump White House last year because of Breitbart’s links to the “alt-right,” a loose network that includes white supremacists. Bannon has called Breitbart “the platform for the alt-right.” But he has disavowed white supremacists on a few occasions and said he is not a white nationalist.

A group of protesters from IfNotNow, a Jewish group that opposes Israel’s West Bank occupation, demonstrated against Bannon’s speech outside the dinner, which took place at the Grand Hyatt. The group also protested the event last year, when Bannon was invited but did not come.

Trump Lauded
The crowd at the dinner warmly welcomed the Trump advisers, and they touted the president’s record on Israel. In his address, Friedman, Israel envoy, harshly criticized the Obama administration’s Israel record while praising Trump’s. In particular, he lambasted the U.N. Security Council resolution in December that condemned Israeli West Bank settlements. The United States abstained, declining to veto the measure.

“We came into office on the heels of perhaps the greatest betrayal of Israel by a sitting president in American history,” Friedman said. “I hope you agree with me that we have turned a page since the dark days of last December. Gone are the days when the United Nations bashes Israel with impunity.”

Friedman also said Trump sees eye to eye with Israel’s government on opposing the 2015 agreement on Iran’s nuclear program, which Israel views as dangerous for its security. Referencing a terror attack this year in the West Bank, he said Trump is more sympathetic to Israeli settlements than previous administrations—though he avoided using the word “settlement.” He said that Trump’s peace plan, which is still being formulated, will prioritize Israeli security.

“The president recognizes the critical importance that Judea and Samaria never become the failed experiment that we saw in the Gaza Strip,” Friedman said, using a term for the West Bank favored by Israel’s right. “And perhaps most importantly, you will never hear the president make the case, as his predecessor did, that there is some symmetrical relationship between, let’s say, building a house in the Samarian village of Halamish and the brutal murder of a father, son and a daughter in Halamish at a Shabbat table.”

ZOA Negative On Peace Plan
Speaking at a news conference before the dinner, ZOA President Morton Klein criticized the Trump peace plan, saying that he feels negotiations are useless because the Palestinian Authority (P.A.) is not interested in peace. He compared the P.A. to Nazis and slammed it for providing stipends to families of terrorists.

“The goal is not statehood, the goal is Israel’s destruction,” Klein said. “They’re nothing but a bunch of Arab Nazis who want to murder Jews.”

“Trump Priorities”
Bannon in his speech framed Trump’s Israel record as part of fighting Islamic terrorism in the Middle East. He said two of Trump’s top priorities coming into the White House were moving the U.S. Embassy in Israel to Jerusalem from Tel Aviv—a promise Trump repeatedly made but has yet to fulfill—and decertifying the agreement on Iran’s nuclear program, which Trump did last month.

“He said, ‘Destroy the physical caliphate of ISIS, designate the Muslim Brotherhood as a terrorist organization, decertify or renegotiate the Iran deal and move the embassy to Jerusalem,’” Bannon said of Trump.

Later, he called Trump “the strongest supporter of Israel since Ronald Reagan,” though Reagan as president was not unequivocally supportive of Israel.

Bannon also repeated some of his trademark phrases. He called the media the “opposition party” three times while gesturing at the press tables in the back of the room. Near the beginning of the speech, he listed a string of exit poll results, state by state, from the 2016 presidential election. And he spoke in militant terms about his fight against establishment politicians and the “global class.”

“We’re leading an insurgency movement against the Republican establishment, against the permanent global class in Washington, D.C.,” he said.

That line did not receive applause from the mostly Jewish crowd.

DC Report: Let us elect our own president! Is it time for a new Constitutional Amendment?
Here are 5 Jewish takeaways from Election Day