‘Stockholm’ is next film in Schenectady Center lineup; Dr. James Strosberg to discuss on Aug. 23 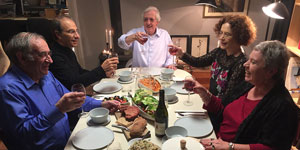 SCHENECTADY  – The Schenectady Jewish Community Center (SJCC) will present the film “Stockholm” as a summer film feature. The film, originally a five-episode television series, will be made available online along with a discussion featuring Dr. James Strosberg. The discussion will be held virtually on Sunday, Aug. 23, at 7:30 p.m. The film will be available from Aug. 20 until the time of the discussion through a link that can be accessed after registering.

In this comedy, Avishai, a leading contender for the Nobel Prize for Economics is found dead by his lifelong friends just days before the award is to be announced. Concerned that his potential legacy as a Nobel laureate is at risk, his friends decide to make it seem that he is alive for five days until the announcement of his award is made. Although it seems like a relatively simple task, their quest to keep Avishai’s death a secret quickly turns into an overwhelmingly complicated challenge.

“Stockholm,” based on the book by Noa Yedlin was created in Israel, 2018 and is 155 minutes. It is in Hebrew with subtitles.

Strosberg, discussion leader, is a retired physician and a member of Congregation Beth Israel of Schenectady. He serves as  the congregation’s recording secretary. Strosberg serves on the board of the Schenectady County Historical Society and performs with the Albany Area Senior Orchestra. He was chief of the department of medicine at Ellis Hospital and was past chairman of the Northeastern New York chapter of the Arthritis Foundation.

Featured films of the SJCC cost of the film is $10 for individual nonmembers and $5 for individual members or $20 for nonmember households and $10 for member households. Information on how to register for the film and discussion, may be obtained at  http://www.schenectadyjcc.org/events/jewish-film-festival/ or by contacting Jewish Cultural & Adult Programming Director Judy Ben-Ami at judyb@schenectadyjcc.org