Students and community rally against hateful words at University at Albany 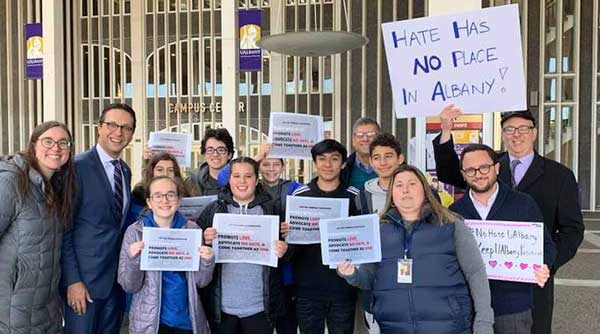 Students from the Hebrew Academy of the Capital District and several others of the local sympathizers show solidarity with the anti-hate theme.

University of Albany students and others marched on Thursday, Nov. 21, against hate as a response to an obscene anti-Israel message that had been left in the snow near UAlbany’s main fountain the previous Tuesday morning.

UAlbany Hillel, together with Shabbos House and Great Danes for Israel, an Israel advocacy group on campus, organized the march to bring the campus community together. The evening after the discovery of the anti -Israel words, students of all the Jewish campus groups met at Shabbos House to discuss an appropriate response.

“We want to bring forward our shared values of mutual respect and civil dialogue in the face of this hate in order to help build a safer and more cohesive campus community,” said Rabbi Nomi Manon, of UAlbany Hillel.

In addition to official statements by UAlbany Hillel, Shabbos House and later UAlbany President Havidan Rodriguez, the student consensus was to have two events on Thursday: a No-Hate/Pro-Love Walk on the campus podium, with a tabling area with an Israel focus inside the Campus Center. The walk lasted three hours with different groups at different times.

Representatives from the Jewish Federation of Northeastern NY, Jewish Family Services, The Capital District Board of Rabbis, local synagogues, the interfaith community, and the 8th grade class at Hebrew Academy all joined the walk around the UAlbany Podium to show solidarity and to demonstrate to the campus community that the hateful act of one individual can be overshadowed by the love, strength and  the positive support of others. 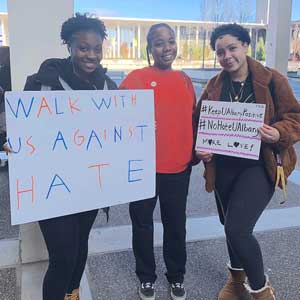 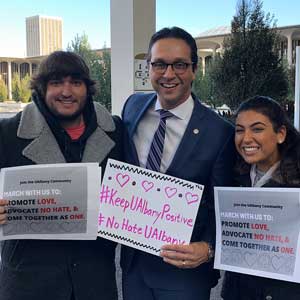 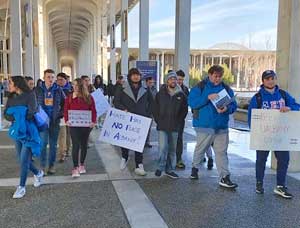 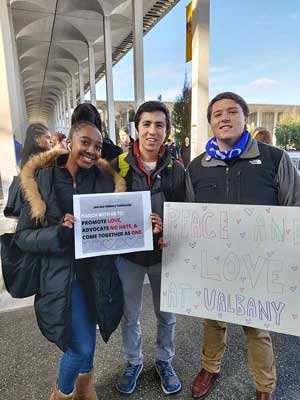 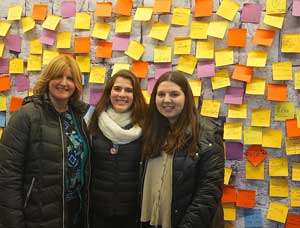 Raizy Rubin, co director of Shabbos House, left, with Taylor Alimari of Great Danes for Israel and Shabbos House L’Chaim, and Rachel Kalter of UAlbany Hillel and Shabbos House L’Chaim Student Boards stand in front of “The Wall of Positivity,” positive messages written by students posted on a large picture of the Western Wall inside the university’s campus center. The campus center also featured a falafel station and Israel information. Two hundred and fifty notes were posted.