Stump the seder guests: Reminders of  what the Pesach symbols and customs mean 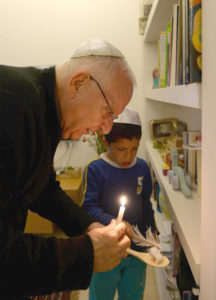 Israeli President Reuven Rivlin with his grandson looking with a candle for any sign of chametz as he prepares for Passover, April 2, 2015. Photo courtesy of Amos Ben Gershom/GPO.p

By DEBORAH FINEBLUM
(JNS) – Why is this year going to be different from all other years? Because this year, you can stump your guests with the meaning behind many of the mysterious rites that comprise the Passover seder.

Turn Off Autopilot
Let’s face it, you finally wrap up those frenzied days of cleaning and cooking. Then your guests arrive (Passover is an even bigger family reunion than Rosh Hashanah), and by the time you pass out the Haggadahs and the seder  begins, you often slog through it on autopilot.

Passover is celebrated for eight days outside of Israel, with two seders held on the first and second nights of the holiday. Israelis celebrate for seven days and hold just one seder the first night. This year, Passover begins after sundown on the 15th day of the Jewish month of Nisan, correlating to Friday, March 30, which is also Shabbat.

But Pesach, which refers to God “passing over” the households of the Hebrews in Egypt during that deadly 10th plague, or killing of the first-born has many traditions. Here are eight customs:

1. The Burning of the Chametz. It’s not enough to trash the chametz (leavened food). We are commanded to actually burn it in a formal bi’ur ceremony the morning before the first seder (having searched for it the evening before with a candle and feather). We learn that chametz represents our haughtiness, and setting it aflame is a dramatic way of excising that puffed-up part of us, which we replace with a humble matzah,” says Rabbi Ron Fish. “But the truth is, by then we’ve finished with all the exhausting preparations and are feeling pretty joyous.” At some synagogues, including Temple Israel in Sharon, Mass., where Fish serves as senior rabbi, the tradition is to burn the chametz with last year’s Sukkot lulavs, which keep the fire burning bright.

One of the lesser-known fours comes from Exodus 6:6-8, where God promises four things: I will take you out, I will rescue you, I will redeem you, and I will take you as my nation. Adler says “as we bless each cup, we thank God for actualizing each of His words with such majesty, letting us know that freedom is a process which doesn’t happen overnight.” 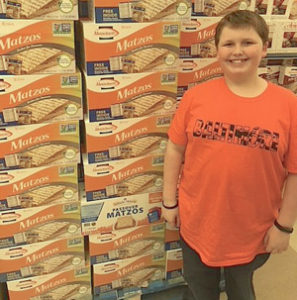 Matzah everywhere! Where is the afikomen? Ten-year-old Daniel Dressin of Owings Mills, Md. is ready for the hunt.

That’s the way Daniel Dressin’s family operates, and the 10-year-old from Owings Mills, Md., is gearing up for some successful negotiating this year. “It’s fun competing against my brothers and cousins to try to find it,” says Daniel, who when asked why it’s hidden, suggests that “maybe it’s like Moses was hidden when he was a baby.” His mother, Rachel, has a more practical explanation: “It keeps the kids awake. And it definitely keeps them entertained.”

By the way, here is a bonus question for your guests. What exactly is that mysterious (and expensive!) round, crisp shmurah matzah? It is matzah monitored (“guarded”) throughout the entire making and baking process by an observant person (and not a machine) to ensure that no leavening transpires. Celebrity Jewish cookbook author Joan Nathan weighs in: “These so-called ‘watched’ matzo that we can buy today, round or oval-shaped, plus matzo meal made from these matzos with a kind of wooden mortar and pestle, used to be all matzo before the Age of Industrialization, when Manischewitz created a machine-made square matzo in the [United] States and earlier in France. Before Passover people would go to a matzo oven, either in the synagogue or the community. And wealthy homeowners even had their own matzo ovens!”

‘We march today because it’s what we have to do to sleep tonight’: Jewish students on the March for Our Lives
‘Improving Self-Control’ to be the theme of the April 15  CGOH speaker program