DC Report
By Douglas Bloomfield
The $110-billion arms deal Donald Trump announced on his visit to Saudi Arabia is like the president himself — a lot of hype but little substance.

Trump hailed it as a “landmark agreement” that will “help our Saudi friends” and “our great American defense companies,” but a leading Middle East expert said it is just more “fake news” out of the White House.

Done Deal, Or Wish List?
Bruce Riedel, a former CIA counter-terrorism expert and National Security Council advisor in four administrations, said that there’s no deal, just “a bunch of letters of interest or intent, but no contracts,” what the Pentagon calls “intended sales.” Some items “don’t actually exist yet,” he pointed out.

It’s really a “Saudi wish list” dressed up as a big deal to give Trump bragging rights, said Riedel, now a Brookings Institution scholar, and includes elements approved earlier by President Obama. He questions whether the Saudis could even afford it in light of falling oil prices and the rising cost of their war in Yemen.

That may help explain why Israel and its friends are barely making a peep.

Quite a contrast to the 1981 Saudi arms sale that included five AWACS early warning aircraft, advanced systems to enhance its fleet of F-15s and various missiles and other weapons. The American Israel Public Affairs Committee (AIPAC) led the ferocious AWACS opposition to that sale— a fraction of the size of the one Trump is boasting about. This time, an AIPAC spokesman merely said Congress “should closely scrutinize” the Trump package.

Taking Care Of Business
I was the legislative director of AIPAC in 1981, leading the lobbying on Capitol Hill, and we had the full backing of American Jewish organizations and the Israeli government. Then, as now, the administration touted the sale as essential to meeting any threat from Iran, a bitter enemy of the United States, Israel and Saudi Arabia. In both instances the White House gave assurances it would have no effect on Israel’s qualitative military edge. But they would say the same thing even if they were selling the Saudi oil sheiks nuclear-armed missiles: business is business.

The business angle cuts both ways. While Israeli Prime Minister Menachem Begin expressed firm opposition to the sale, his ambassador in Washington, Ephriam Evron, felt we should let it go and secretly lobbied against us. 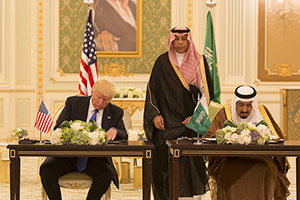 but lost in the Senate by three votes — I made a startling discovery.

In addition to the five AWACS planes being sold there were also conformal fuel tanks for the U.S.-made Saudi F-15s to extend their range, firepower and lethality.

I was in Israel that autumn and visited Israel Aircraft Industries at Ben-Gurion Airport. What I saw there surprised me. There were crates of F-15 conformal fuel tanks, which made sense since the Israeli Air Force had its own fleet, but these were all addressed to “Royal Saudi Air Force” in Riyadh with a return address of “Tulsa, Oklahoma.” While we were telling the Congress these posed a threat to Israel, the Israelis were manufacturing them to sell to the same Saudi enemy.

I wondered whether the Saudis knew that they had fought to buy Israeli-made equipment! Had they known, would they have cancelled the deal?

“Absolutely, they knew we were making them,” a former IAI executive told me. McDonnell Douglas subcontracted that and other F-15 components to IAI and still does for other subsystems on the Saudi fleet.

Israelis Mum
The Carter administration, which sold the Saudis the original F-15s, had restricted their range, firepower, basing (near Israel), avionics and refueling capabilities, but the Reagan administration quickly lifted all restrictions. The Saudis now have about 400 F-15s, the third largest fleet after the United States and Japan. Israel has about 200.

More evidence that this Saudi sale is “fake news” is that “Bibi isn’t objecting,” said the former IAI executive.

Bibi is Prime Minister Benjamin Netanyahu, who has carefully cultivated an intelligence sharing and security relationship with the Saudis, since both realized that neither is a threat to the other and working together, even clandestinely, can be mutually beneficial.

There are recent reports that the two are discussing economic ties, possibly starting with the approval of El Al over-flights. Israeli companies already are doing some business with the Gulf States and are seeking openings in Saudi Arabia. The latter may be wishful thinking on the part of Americans looking for bragging rights for Trump diplomacy.

Whether Trump’s $110-billion deal is real, or just more fake news, and while the Israeli government and AIPAC don’t seem to take it very seriously, it has sparked some of the most absurd pandering ever seen on Capitol Hill.

Priorities And Principles
Second term Democrat Brad Schneider (Illinois) and freshman Republican Claudia Tenney (New York) have introduced legislation to require the president to “consult” the Israeli government before “authorizing” arms sales to Mideast countries. Their stated purpose is to protect Israel’s military superiority. It is right up there with 2012 Republican presidential candidate Mitt Romney saying “I’d get on the phone to my friend Bibi Netanyahu and say, ‘Would it help if I said this? What would you like me to do?’”

Recently, the Senate narrowly approved a sale of precision-guided munitions to Saudi Arabia that had been blocked by the Obama administration out of concern that the Saudis had been using similar weapons against civilian targets in Yemen.  Obama’s objections were about civilian casualties, Trump’s message was/is it would create American jobs.

That tells much about the priorities and principles of this administration and a dominant theme of the Trump presidency: undo and erase what Obama did. It also says much about Trump’s inflated self-image as the leader in the war on terror. How, exactly, does sucking up to one of the major supporters of a particularly virulent form of Islamic extremism contribute to that effort?

But then maybe all the news coming from the White House about the war on terror is fake.