Suddenly, our Jewish temples are shaking… 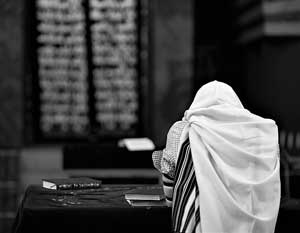 A man prays at synagogue. Photo courtesy of Pixabay.

Adaptations
When the Second Temple was destroyed in 70 A.D., Judaism and the Jewish people were forced to adapt. We became wandering Jews. In time, we replaced sacrifices with prayers, brought Temple rituals to the Shabbat table and put a major emphasis on Torah study, among other evolutions.

We also lost our obsession with real estate. We prayed for the return of the Third Temple, certainly, but we left that mostly to God. On the ground, while other religions were building spectacular monuments, we invested in education.

Our focus on “mind estate” and “soul estate” rather than real estate was reinforced by our insecurities. Long periods of persecution and being guests at the mercy of foreign rulers were not ideal conditions for Jewish construction booms.

Real Estate Boom
When we discovered America, we built with a vengeance. Finally, we had found a place where ownership of property was protected by enforceable laws. For a people traumatized by its past, the idea of owning land and buildings was irresistible. It’s not called “real” estate for nothing.

This impulse to build on your own land wasn’t limited to real estate magnates. It became prevalent throughout the Jewish world, from synagogues, museums and community centers to schools, Holocaust memorials and cultural institutions. Groundbreaking and ribbon-cutting ceremonies in the presence of wealthy donors became a Jewish ritual in its own right, a sign that you had made it.

Naming Opportunities
Of course, the essential ritual that enabled these ceremonies was the selling of “naming opportunities” to potential donors. You will hardly see a Jewish building without countless donor names featured on its walls, right down to the elevator. All told, over the decades billions of Jewish philanthropic dollars have been invested in these structures, some of them architectural marvels.

Like virtually all commercial spaces throughout the country that depend on crowds to survive, pretty much every Jewish place in America is on lockdown, closed for business.

They haven’t been confiscated by ruthless leaders; they have been attacked by a lethal virus.

Let’s not mince words: this is a shock to our system. The notion that a beautiful Jewish space has become a potentially dangerous place is not something anyone can easily process. The heart and soul of these places is to bring people together—physically. Once proximity to other people becomes a threat to our health, how much is the space worth?

Don’t be fooled by the Zoom craze. It’s wonderful that so many prayer services and classes and events have moved online, but behind those lively digital screens lies an exceedingly uncomfortable question: What will happen to all these empty spaces?

Safety Moves Outside
As the COVID-19 crisis continues indefinitely and experts warn of future outbreaks and a leading World Health Organization official says the coronavirus “may never go away,” this question will take on an added urgency.

The longer these buildings stay empty, the greater the costs of carrying them. And as people get more and more comfortable replacing on-site experiences with the online safety of their homes, how many will risk venturing back into crowds, even after a vaccine is eventually found in a year or two or three?

I haven’t met too many rabbis who are confident that synagogues will reopen in time for the High Holidays. The irony is that because being outdoors is safer than being indoors, even if services do come back, congregants will presumably prefer not to have roofs over their heads.

The fear of a virus is no longer the only fear among Jewish leaders. Now, it is the fear that many Jewish institutions that rely on attendance, membership dues and other sources of revenue may not be able to hold on until the crisis is over, whenever that will be.

I know, there are always silver linings, such as “more Torah learning than ever” and “our community’s amazing ability to adapt” and “it’s bringing out the better angels of our nature.”

“Hinge In History”
Those silver linings won’t mitigate the disruptions about to hit our community. A Jewish world where people are encouraged to stay away from one another for their safety is a challenge unlike any other. Our Jewish buildings, like them or not, have served as essential gathering places that have kept our communities together and nourished our friendships and sense of peoplehood. Hard to do all that on Zoom.

Harvard University professor Lawrence Summers, writing in the Financial Times, calls the COVID-19 pandemic a “hinge in history” that “will still be considered a seminal event generations from now.”

It will be a hinge in the story of American Jewry as well. Yes, we will do our very best to adapt. When the time comes, buildings still in operation will reconfigure their spaces and establish guidelines to minimize safety risk, while some may give more prominence to the great outdoors. In the meantime, we will strive to maintain our communal bonds and we will put our most creative minds to work imagining a new and better normal.

But before we rush into glib prophecies, let us take a moment to absorb what is happening. After a century of continuous building, our Jewish temples in America are suddenly shaking, suddenly empty, and none of us can quite see where we will be wandering next.

David Suissa is editor-in-chief and publisher of Tribe Media Corp and Jewish Journal. He can be reached at davids@jewishjournal.com.

This article was first published by the Jewish Journal.

The Jewish neshamah doesn’t want to wait: Conversions on hold for many
Pro-Israel groups react to Erdan’s appointment as next Israeli envoy to U.S. and UN