Sukkot (Feast of Tabernacles) guide for the perplexed, 2019 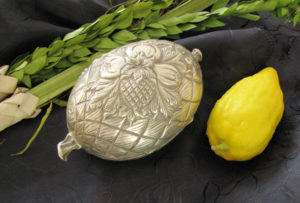 The signs of Sukkot: a lulav, etrog and an etrog box.  Photo courtesy of Wikimedia Commons.

More on Sukkot and other Jewish holidays: http://bit.ly/137Er6J

2. the 3rd Jewish pilgrimage holiday (following Passover and Shavou’ot – Pentecost) has been celebrated for the last 3,300 years, commemorating the Exodus, the 40 years of wandering in the Sinai Desert, the construction of the Holy Tabernacle and the victories along the way into the Land of Israel. It reaffirms faith in God, reality-based optimism, gratitude for the Ingathering and the harvest. Sukkot reminds people of human limitations and (its humble structure) emphasizes the importance of humility. Humility is a central message of Sukkot, as demonstrated by the seven day relocation from one’s permanent residence to the temporary, humble, wooden Sukkah (booth).

3. Sukkot ( in Hebrew) is named after the first stop during the Exodus from Egypt, the town of Sukkota (סוכותה), as documented in Exodus 13:20-22 and Numbers 33:3-5.  It commemorates the transition from nomadic life in the desert to permanence in the Promised Land; from oblivion to deliverance; and from the spiritual state-of-mind during the High Holidays to the mundane of the rest of the year.

4. The Hebrew root of Sukkot ()stands for the key characteristics of the relationship between the Jewish people, the Jewish Homeland and faith in God. The Hebrew word Sukkah () means wholeness and totality (), the shelter of the tabernacle (), to anoint (), divine curtain/shelter() and attentiveness ().

6.  Sukkot – the 3rd Jewish pilgrimage, following Passover and Shavou’ot (Pentecost) – is a universal holiday, inviting all peoples to come on a pilgrimage to Jerusalem, as expressed in the reading of Zechariah 14: 16-19 on the first day of Sukkot: “Then, the survivors from all the nations that have attacked Jerusalem will go up [to Jerusalem] every year to worship the Lord Almighty and to celebrate the Festival of Tabernacles.”  Sukkot expresses the yearning for universal peace, highlighting the Sukkah of Shalom (peace). Shalom is also one of the names of God.  Shalem (שלם) – wholesome and complete in Hebrew – is the ancient name of Jerusalem. There are 32 towns named Salem (Biblical Shalem, JerUSAlem) in the USA.

7. Traditionally, The holiday of Sukkot is dedicated to the study of the Biblical Book of Ecclesiastes, written by King Solomon. It accentuates the importance of humility, morality, patience, learning from past mistakes, commemoration and historical perspective, family, friendship, long-term thinking, proper timing, realism and knowledge. The Hebrew name of Ecclesiastes is Kohelet, (), which is similar to the Biblical commandment to assemble () the public () and the community () for the celebration of Sukkot.

8. The late Senator Robert Byrd (D-WV), the longest serving US Senator, often quoted Biblical verses, in general, and Ecclesiastes, in particular. For example, on November 7, 2008, upon retirement from the chairmanship of the Senate Appropriations Committee, he stated: “To everything there is a season and a time for every purpose under heaven (Ecclesiastes 3:1).”

More on Sukkot and other Jewish holidays: http://bit.ly/137Er6J