Survival is due to ‘miracles,’ says father in central Israel whose home was hit by rocket 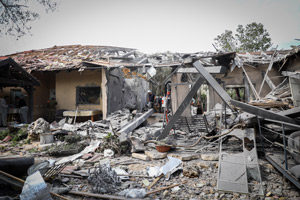 Israeli security forces inspect the scene of a house that was hit by a rocket fired from the Gaza Strip in Moshav Mishmeret, central Israel, on March 25, 2019. Photo courtesy of Noam Revkin Fenton/Flash90.

(JNS) – Daniel Wolf, whose home was hit by a long-range missile from Gaza on Monday, March 26, said although his family home was destroyed in the attack, “a lot of miracles happened” that ultimately spared the family from death.

“We are in shock, but the most important thing is that we are all OK,” Daniel Wolf told Channel 13 from the hospital. “It was traumatic. After the explosion, there was silence, dust and screaming. Destruction everywhere.”

Wolf, who lives in Mishmeret north of Tel Aviv, faintly heard the siren just after 5 a.m. “When I heard the siren, I ran and grabbed my oldest daughter, and then I got my wife and my younger daughter and dashed them to the shelter,” he said. “My mother was in between the shelter and the kitchen when we heard an enormous explosion followed by silence … it was terrible.”

Wolf said his father Robert and sister were standing in the front yard when the rocket hit, and were not seriously injured.

“There were a lot of miracles that happened,” he said.

According to Wolf, his mother and daughters, who were injured, are expected to make a full recovery. Two family dogs were killed.

Daniel said that normally, he would have been in bed. However, the night before the attack, he happened to have fallen asleep on the couch, a room with better acoustics than his bedroom, which enabled him to hear the siren. He immediately woke up and roused his wife, parents and daughters, grabbing the girls and racing with his wife to the safe room in their home.

Daniel’s mother, Susan, didn’t make it to the safe room in time and suffered the most serious injuries in the family.

“I nearly lost my family,” said Robert  an immigrant from Great Britain Wolf, standing outside the remains of the destroyed home, according to a report by The Jerusalem Post. “If we had not gotten to the bomb shelter in time, I would now be burying all my family.”

The family was evacuated to Meir Medical Center in Kfar Saba. Susan Wolf was transferred to Beilinson Hospital in Petach Tikvah in moderate condition.

The force of the blast was so massive that it damaged several houses in the vicinity, blowing out the windows in the house across the street and cutting the gas line. Yet in another miracle, no explosions resulted.