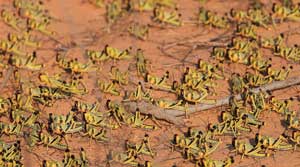 Thousands of locusts swarm in the sands of Halutza in southern Israel several years ago—May 15, 2013. Photo courtesy of Dror Garti/Flash90.

By MARCY OSTER
JERUSALEM (JTA) –A plague of locusts considered “extremely alarming” is headed toward Africa and the Middle East but is likely to bypass Israel.

The locusts are breeding and forming new swarms in the Horn of Africa, The Times of Israel  has reported, citing Locust Watch, part of the Food and Agriculture Organization at the United Nations.

The swarms represent “an unprecedented threat to food security,” according to the Locust Watch website.

Among the countries expected to be the hardest hit are Kenya, Ethiopia, Somalia, Iran, Pakistan and Sudan, according to the report.

Coronavirus restrictions on travel may prevent proper, timely treatment against the pests.

The last such serious infestation in the region was a plague in 1987 to 1989.